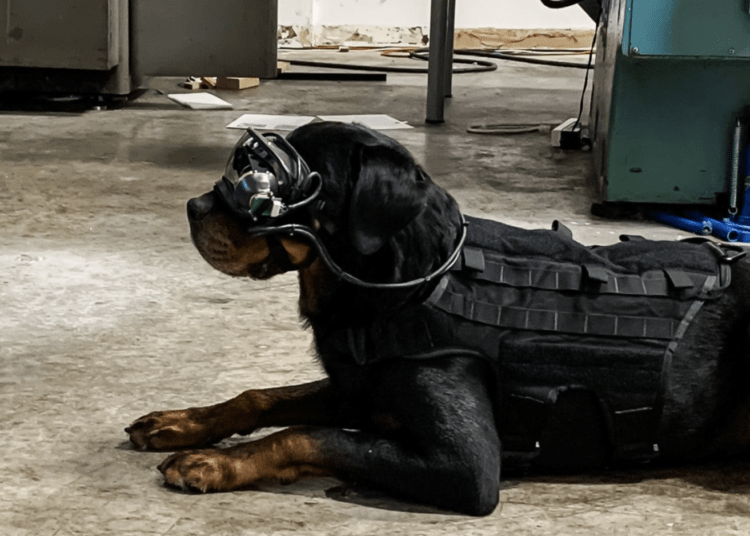 A new technology provides military working dogs with augmented reality goggles that allows a dog’s handler to give it specific directional commands while keeping the warfighter remote and out of sight. (Courtesy Command Sight via Army.mil)

The US Army is testing augmented reality goggles on its service dogs. The goal is to allow troops to give orders remotely.

“Augmented reality works differently for dogs than for humans,” said Dr. Stephen Lee, an Army Research Office senior scientist in a statement. “AR will be used to provide dogs with commands and cues; it’s not for the dog to interact with it like a human does. This new technology offers us a critical tool to better communicate with military working dogs.”

The technology is still just a prototype from the Seattle-based company Command Sight. The initial design is wired and requires a leash. However, the company said in an Army news release it’s working on a wireless model.

“We are still in the beginning research stages of applying this technology to dogs, but the results from our initial research are extremely promising,” Dr. A.J. Peper, the company’s founder said.

Peper added he had mostly been testing out the gear on his own Rottweiler, Mater.

“His ability to generalize from other training to working through the AR goggles has been incredible,” he said. “We still have a way to go from a basic science and development perspective before it will be ready for the wear and tear our military dogs will place on the units.”

Soldiers typically direct military dogs via hand signals and laser pointers, which require them to be nearby. The Army has also tried with equipping the dogs with walkie-talkies and live cameras but found their K9s to be easily confused, the Army said, Fox reported.

The AR technology is still some time away. Researchers hope to develop a wireless version over the next two years, according to the Army.

Peper said initial feedback from his proof of concept was, “the system could fundamentally change how military canines are deployed in the future.”