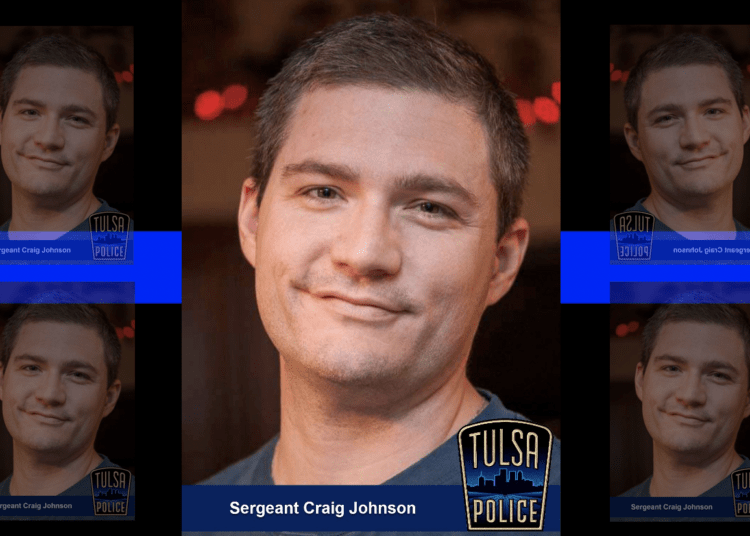 Sgt. Craig Johnson was murdered by a gunman during a traffic stop Monday. (Graphics by Law Officer)

TULSA, Okla. — The Tulsa Police Department announced the passing of Sgt. Craig Johnson. He was critically wounded by a gunman Monday, along with Officer Aurash Zarkeshan.

David Anthony Ware, 32, was arrested later in the day after a manhunt that lasted several hours, Law Officer reported.

During his opening comments during Tuesday’s press conference, Chief Wendell Franklin discussed how difficult the law enforcement profession can be.

In a somber moment, the chief said, “This morning, Sgt. Craig Johnson, his condition changed. One of his wounds was critical. He underwent surgery. Doctors and nurses did everything they could to save his life. Today, Sgt. Craig Johnson passed away.”

Chief Franklin said Johnson’s family made a decision to donate his organs, which will take place. He leaves behind his wife, two parents, and two young boys.

“He also leaves behind a bunch of brothers and sisters who stand behind me,” Chief Franklin said.

Johnson was awarded a purple heart by the department.

He joined the Tulsa Police Department in 2005, and was promoted to sergeant in 2015.

“Craig is a tremendous loss to our department. I want to thank his family for sharing him with us. … His sacrifice will not go unremembered. … Each morning, I open my Bible app and read. This morning I read 2 Corinthian 4:16, ‘Therefore we do not lose heart. Though outwardly we are wasting away, yet inwardly we are being renewed day by day.'”

The department did not field questions or provide an update regarding Officer Aurash Zarkeshan.

A fund is set up by the Tulsa Police Fraternal Order of Police to support the families.

TULSA, Okla. — A man is in custody after two police officers were shot during a traffic stop in east Tulsa early Monday morning, Law Officer reported.

Tulsa police say a man shot two of their officers during the stop around 3:30 a.m. near 21st and Memorial.

Officer Aurash Zarkeshan conducted a traffic stop on a vehicle driven by David Anthony Ware. The reason for the stop was due to a paper tag that had expired, according to court documents.

Zarkeshan told Ware to get out of the car because it was going to be towed. Nevertheless, police say Ware refused.

Chief Wendell Franklin said during a news conference that Johnson tried to use his taser before Ware grabbed it. As a result, Johnson pepper-sprayed him while trying to get him out of the car.

Ware then reached under his seat for a gun and fired three times at the two officers, according to the affidavit.

Johnson was shot in his head and body, reported Fox 23.

Zarkeshan was shot in his head, upper body, and lower body.

Documents say Ware stood over Johnson after he’d been hit and shot him three more times.

Both officers were taken to the hospital where they are in critical condition.

Chief Franklin did not offer a medical update on Johnson or Zarkeshan, although he spoke in somber reverence during the news conference.

Police searched for several hours before finding David Anthony Ware who they say shot the officers and ran away.

Officers found him at a home near 31st and Garnett.

Police say a second person wanted in connection to the search is also in custody. He was identified as Matt Hall.

The chief said both officers had bodycams activated and were used to facilitate identifying the suspect.

Ware is facing charges for shooting with intent to kill.