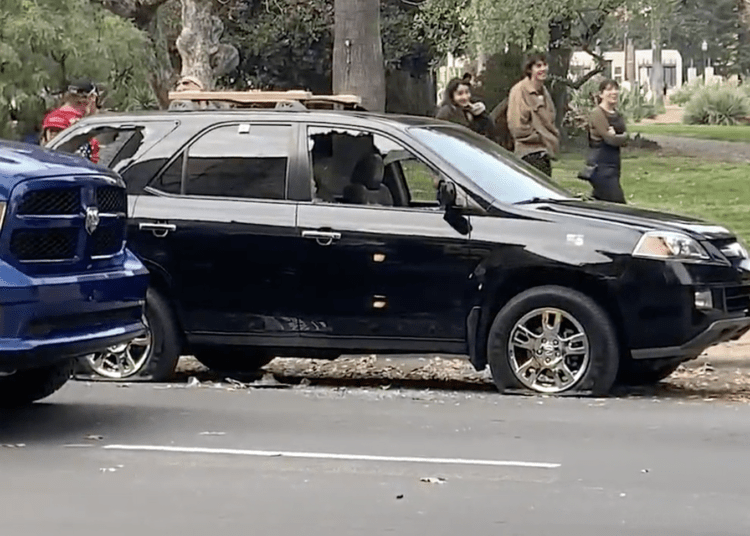 Many Trump supporters had their vehicles trashed at a rally in Sacramento. (Screenshot KXTL)

SACRAMENTO, Calif. — Hundreds of protesters and counterprotesters gathered at the California state Capitol Saturday, and it left some people having to find a way to get home after their cars were vandalized, KTXL reported.

Things were calmer Saturday night, but there was a lot of vandalism on N Street near 15th Street.

“There is no need to go trashing other people’s stuff,” said Karyn Tompkins. “Our tires on the right side have been slashed.”

She told KTXL she attended a pro-Trump rally at the Capitol and was met by counterprotesters.

“We came out here like around 2 o’clockish and that is when we saw cars just vandalized,” Tompkins said.

Her passenger-side tires were damaged, along with the side and back windows.

“I cried because I was very mad,” Tompkins said.

Lisa Carlisle says she was also in the same situation. Her truck’s tail lights were knocked out and the side mirror, windshield and tires were damaged.

They weren’t the only people to have their cars walloped and sliced.

Both women claim the counterprotesters damaged at least 10 vehicles near the Capitol.

Carlisle and Tompkins say it was the first time they have had their property damaged at a rally and that it crossed the line.

“We are all different and that is what makes America great. Embrace it,” Carlisle said.

Those who had their property damaged say they filed a police report.

It was not clear how many total vehicles were vandalized during the rally as Sacramento Police Department had not responded to local news requests for information by time of publication.