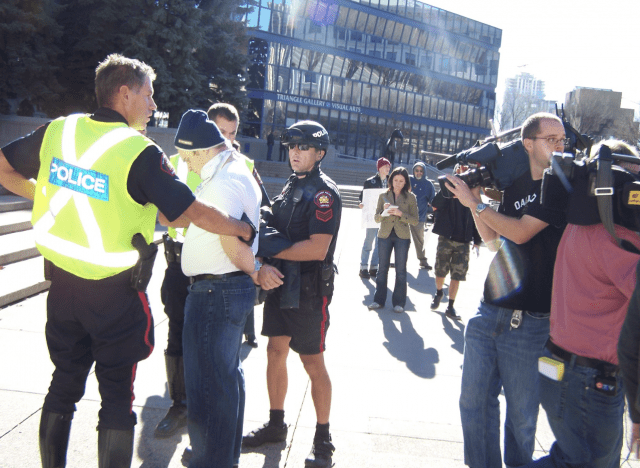 byScott Medlin
Share and speak up for justice, law & order...

Do not constantly watch the news.  The mainstream media is trying to destroy law enforcement, and it can cognitively destroy you.

Even the CDC advises on its website to take breaks from the news, to help reduce stress.  Needless to say, there is sufficient stress ever present in law enforcement right now.

I challenge you to not watch the news.  What you expose your mind to, is how you are going to feel. The mainstream news is anything but wholesome and uplifting. Think about the common phrases associated with the news:

“If it bleeds it reads.”

You get the point.

Yes, I am going to make a strong blanketed assumption here…At no time does someone in America turn on the mainstream media in an effort to add real positive change and increased value into their lives!  If they do, then I hope they realize there are better options in life.

The mainstream media must come up with news stories to draw in our attention, and while they may throw in some facts, the facts are presented in a way to trigger your emotions.

This is toxic for your mind. It is bad enough that the duties of being in law enforcement are dealing with the grim realities that the majority of the population will never muster up the courage to confront.

These grim realities I reference can be summed up in one word: trauma. The incidents of children being victims, seeing gunshot victims take their last breath, or pulling up to the scene of a fatal car crash. It is all trauma. It is hard enough on us to cope with the shock. So why expose yourself to the news when your brain is already dealing with consistent run-ins with trauma?

Now I’m sure you might be thinking, “Scott I have to know what is going on in the country and in the world.”

If you are concerned that not watching the news for a day, or for the week, will make you too inept to carry out your daily purpose and function, then just check the headlines for a few minutes, and no more. Or, have someone spot you and let you know if there is a foreign force coming to invade us.

But in reality, you cannot make an effort to constantly keep up with the events unfolding in different areas of the country right now.  If you are a police officer in Seattle, then there is obviously enough going on and there is nothing about the unrest in Washington DC. Am I saying you should not be supportive of fellow officers on the line? No, absolutely not, but you should not overly expose yourself to the news about what they are dealing with.

My passion is promoting good mental health in law enforcement. The tragic suicide rate among officers and incidents unfolding all across the country right now, have police stuck between a “rock and a hard place”.

Just do as much as you can to stay sharp because your mental health deserves it and when you are mentally fit, you can be what the public expects you to be.  Staying away from the news, is one technique to stay sharp, if I did not already make that clear enough.

Stay safe do the right thing!

– Scott Medlin, author of “Mental Health Fight Of The Heroes In Blue: How To Mentally Survive Working as a Police Officer”

Scott has worked as a Police Officer since 2007. Prior to that, he was in the United States Marine Corps. He also attended college. He was deployed for Operation Iraqi Freedom in 2003 and 2005. Once he was honorably discharged from the Marine Corps and earned his Bachelors Degree, Scott entered into law enforcement. Through deployments and time in law enforcement, Scott has done his best to inspire others and be a team player. Scott has helped fellow officers keep marriages together, pull through during hard financial times, overcome depression, and has provided encouragement whenever an officer needed it. He is also willing to share his mental health fights to teach others how to become aware, and overcome.

Scott Medlin has worked in law enforcement in since 2007. Prior to that he was in the United States Marine Corps. He was deployed for Operation Iraqi Freedom in 2003 and in 2005. He was honorably discharged from the Marine Corps and earned his Bachelor's Degree. Through deployments and time in law enforcement Scott has valued inspiring others. Scott has helped fellow officers keep marriages together, pull through during hard financial times, overcome depression, and provided encouragement whenever an officer needed it. Scott is willing to share his mental health fights as a means to teach others how to become aware and overcome.