The Great Lies of Ferguson 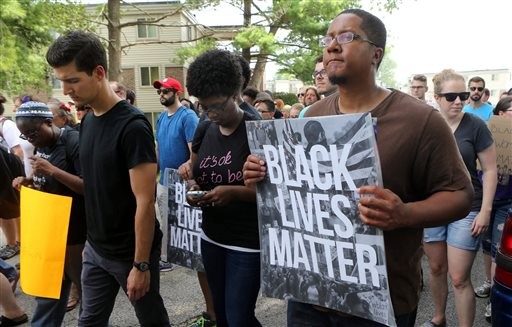 The stores are being looted, again. The rocks and bottles are being thrown at the police, again. The shootings and fires and angry shouts are garnering headlines all over the world, again. And the irony is that all of this destruction and mayhem is built on nothing except the Great Lies of Ferguson, Mo.

The foundation of all of the Ferguson lies is of course the “hands up, don’t shoot” narrative that came about when Ferguson Police Officer Darren Wilson, who happens to be white, confronted a man who had just committed a robbery—Michael Brown, who happened to be black.

Brown was accompanied by the unwitting architect of the First Great Lie of Ferguson, Dorian Johnson, and when Wilson confronted the two men on a public street, Brown attacked the officer, beat him and attempted to take the his firearm while Officer Wilson was still in his patrol car. For a police officer to have his weapon taken by a suspect is almost certain death or injury. However, Wilson was able to shoot Brown while still in the car and then, during a short foot pursuit, Brown once again charged the officer and was killed.

The shooting began a gathering storm of community outrage, as Dorian Johnson told as many people as he could that Officer Wilson shot Brown while he was running away with his hands in the air yelling “hands up, don’t shoot.” The First Great Lie of Ferguson. Still, the tragedies that were to follow might have been avoided if the Purveyor of Great Lies, known to most as “the media” had not seized upon this sensationalized headline and—caring not even one iota that it painted an innocent police officer as a cold-blooded murderer—proceeded to air it on the average of every 15 seconds for weeks on end.

The storm continued in an unabated media orgy the likes of which have never before been witnessed. Careers were made, media paychecks were fattened, ratings went through the roof and the city burned. Enflamed by the First Great Lie, crowds of community members—some from lands far, far away—descended upon the little town of Ferguson with all of the conscience of a swarm of angry wasps and began a swath of destruction, all in the name of justice for Michael Brown. Yes, the same Michael Brown who was videotaped robbing and beating up a convenience store clerk minutes before attacking a police officer, beating him and trying to take his gun. A true “hero” if ever there was one and clearly someone who should be admired and even have the honor the President of the United States attending his funeral.

The Second Great Lie, perverted and served up by the Purveyor of Lies, was that the reason all those poor protesters (whose First Amendment rights had to be fastidiously protected by the same people they were attacking) were forced to smash through windows and loot the very businesses that had served them for years was because of “the militarization of police.”

In interview after televised interview, and in the pages of articles online and in print, the riots became the fault of the police once again. The reason, as “experts” proclaimed, was that because police had the audacity to wear uniforms that resembled those of the military, and had equipment that might actually protect them from the rocks and bottles and firebombs that were being thrown at them, it was their fault. Well, of course, because after all, the President himself agreed so how could it not be true?

The Great Lies of Ferguson continue. Even though Officer Darren Wilson was investigated by every possible level of government, and cleared of any wrongdoing by a Grand Jury and the Department of Justice, and the myth of “hands up, don’t shoot” was exposed and debunked, that did not spare the officer. With thousands of mindless chant-screamers taking to the streets of American cities, Hollywood types and even sports figures calling for Officer Wilson’s head on a spike, the very police department and city that he served for years (and had the attack on him gone differently would have given his life for), served him up like a holiday ham to the great lynch mob crying out for justice.

He was forced to flee for his life and go into hiding to safeguard his family, and he remains unemployed to this day.

In the year that followed, adhering to recommendations from every conceivable commission and government investigation reaching all the way to Washington, D.C., changes were made. The white police chief was fired and a black chief hired. More black officers were added, white city council members were replaced by black officials. New training was ordered for police and “softer” uniforms replaced standard issue. All of these wonderful changes were heralded by an article just days before the one year anniversary of Michael Brown’s death as evidence of the new and improved City of Ferguson.

And then, as evidence of this being another Great Lie of Ferguson, the city erupted. Protesters once again took to the streets demanding that their First Amendment rights be protected by the police. Those First Amendment rights included getting in the faces of police and screaming vile obscenities and threats, but hey, that’s what free speech is all about right?

But that wasn’t enough. Within hours, the same stores that had just begun to rebuild were again burned and looted. Angry crowds brought the city to a standstill, vandalizing, burning and attacking the police (in their Obama-approved “softer” uniforms) with rocks and bottles. And who was there to bask in the carnage and once again delight in the headlines and ratings? You guessed it. The Great Purveyor of Lies, the mainstream media.

While the crowd burned and looted, journalists scurried around with their cameras and notepads, making sure to give as much airtime as possible to protesters, civic leaders, community activists and politicians who could enlighten the world as to why the need for violence continues. And in the greatest of all of the Great Lies of Ferguson, as gunshots rang out and bullets flew, as cops were shot and honest citizens hid in their basements, we once again heard who was to blame: the police.