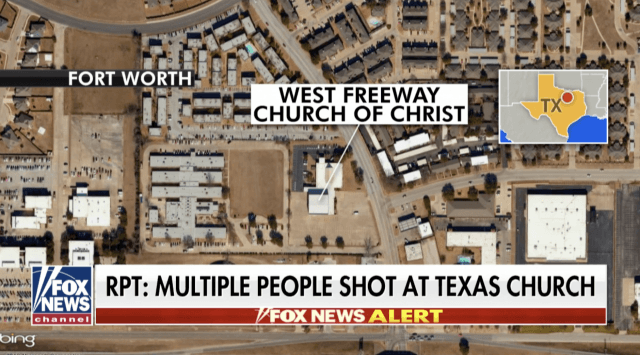 FORT WORTH, Texas – Two people were killed and another person was injured in a Texas church shooting on Sunday, according to officials.

The crime occurred around 9:57 a.m. at the West Freeway Church of Christ, which is located in the city of White Settlement, just outside of Fort Worth.

MedStar, the ambulance service provider to Fort Worth and other cities in north Texas, said that two people were killed in the shooting while another person was in critical condition.

MedStar added that the victims ranged in age from 30 to 60 years old. MedStar Mobile Healthcare spokeswoman Macara Trusty told The Associated Press that one person died at the church in White Settlement, about 8 miles west of Fort Worth and the other died en route to the hospital.

“It was the most scariest thing. You feel like your life is flashing before you,” Isabel Arreola told the television station. “I was so worried about my little one.”

The church was apparently live streaming the service when the shooting took place, Fox 4 reported.

The AFT is heading to the scene At West Freeway Church of Christ where at least three people have reportedly been shot, two dead (including the shooter). @DavidSFOX4 and i will have team coverage. The church was live streaming the service when the gunshots happened. @FOX4 pic.twitter.com/2t7Q7iwhyS

Images from the scene showed a massive emergency response. Texas Gov. Gregg Abbott called the shooting an “evil act of violence” at the church.

“Places of worship are meant to be sacred, and I am grateful for the church members who acted quickly to take down the shooter and help prevent further loss of life,” the governor said in a statement. “Cecilia and I ask all Texans to join us in praying for the White Settlement community and for all those affected by this horrible tragedy.”

David McClelland with Tarrant County Sheriff’s Office confirmed to Fox News the shooter is “down” and suffered a gunshot wound, but it’s unclear where the bullet came from. At this time, authorities believe there was only one gunman. MedStar told Fox 4 the shooter was among the dead.

Texas Attorney General Ken Paxton tweeted about the shooting, asking for prayers for “any victims and their families, this congregation, and the law enforcement officials at the scene.”

We are shocked and saddened to hear reports of a shooting at a church in White Settlement.

As reports come in, please pray for any victims and their families, this congregation, and the law enforcement officials at the scene. My office will assist in any way needed.

Agents from the Dallas Field Division of the Bureau of Alcohol, Tobacco, Firearms, and Explosives said they were responding to the scene of the reported shooting.

White Settlement is located about 8 miles west of Fort Worth.