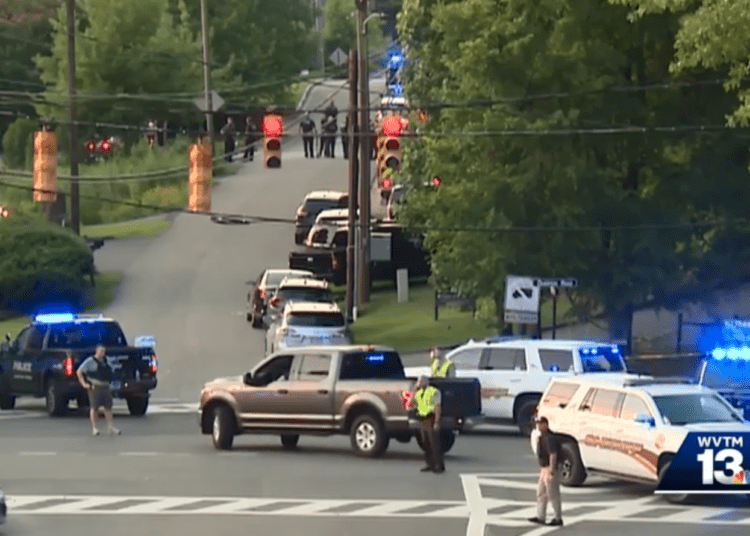 A gunman opened fire at an Episcopal church in Vestavia Hills, Alabama on Thursday. (Screenshot WTVM 13)

VESTAVIA HILLS, Ala. – A church shooting in Alabama has left two people dead, one wound and the suspect is in custody, according to reports.

The gunman opened fire at the St. Stephens Episcopal Church in Vestavia Hills about 6:20 p.m. Thursday. According to a website schedule, the church was hosting a “Boomer Potluck” when the homicides occurred, Fox News reported.

A lone gunman entered the church and began firing. One victim was pronounced dead at the scene. Two others were transported to a nearby hospital. One of the two taken to the medical center did not survive, police said.

The church was hosting a “boomer potluck” at the time of the shooting, according to the church’s website. (Google Maps)

The surviving victim is being treated at UAB Hospital in Birmingham, according to WVTM 13.

A “hero” attending the potluck subdued the gunman, which facilitated his capture by police, CBS News reported.

The suspect is a 71-year-old man who occasionally attended the church, according to authorities. He used a handgun to carry out his crimes. No further details were immediately available.

Rev. Kelley Hudlow with the Episcopal Diocese of Alabama spoke to WVTM 13 at the scene, saying. “We’re gonna need a lot of love.”

“As we are learning about the shocking and tragic loss of a life at St. Stephen’s Episcopal Church in Vestavia, we want to offer our prayers for the victim’s family, the injured and the entire church community. I am glad to hear the shooter is in custody. This should never happen – in a church, in a store, in the city or anywhere.”

Vestavia Hills is a suburb of Birmingham in the central part of Alabama.

“It is with great sadness that the Vestavia Hills Police Department reports the passing of the third shooting victim from Saint Stephen’s Episcopal Church,” police officials announced. “The family of the victim asks that we do not release her name for reasons of privacy. Our thoughts and prayers continuously go out to the victims, their families and all who are affected by this tragic event.”