The agency is offering a $15K hiring bonus 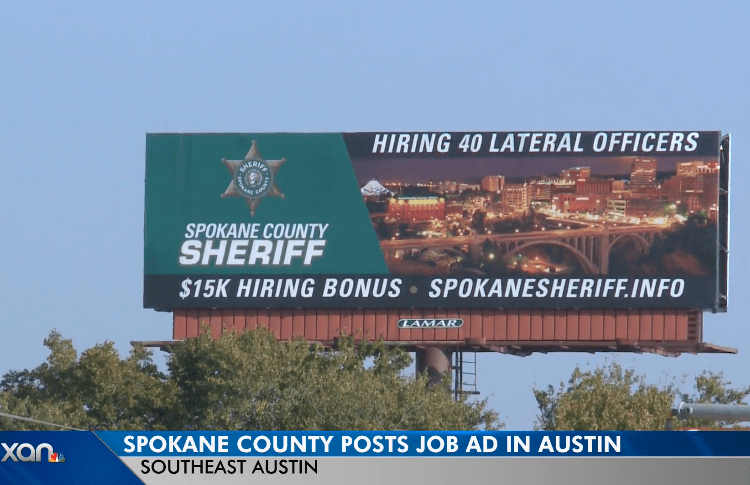 AUSTIN, Texas — The Spokane County Sheriff’s Office in Washington state apparently understands the anti-police sentiment expressed by civic leaders in Austin, Texas, and is therefore spending resources to recruit officers away from the Austin Police Department.

The sheriff’s office recently paid to put up a billboard along U.S. 183 near an Austin neighborhood, which is located southeast of the city’s urban core. It’s essentially a “help wanted” ad that is specifically looking to lure away local law enforcement officers to become deputies in the Spokane area. They are enticing lateral officers with a hiring bonus of $15,000 to jump ship and become a deputy, KXAN reported.

Spokane County Sheriff Ozzie Knezovich acknowledges the strategy to boost their staffing with officers who feel betrayed by their local leaders.

Knezovich told KXAN that his research identified Austin, Portland, Seattle and Denver as places where he may be able to find current law enforcement officers who’d be willing to leave and fill at least 40 openings with his department. Similar billboards in other areas have helped recruit 20 deputies from other agencies.

Knezovich responded to a question about what he would say to local law enforcement leaders who may criticize him for trying to poach workers thousands of miles away.

“I guess to the agencies that lose them, I would ask them to maybe reflect on their local elected leaders and their efforts to maintain their employees,” Knezovich said. “You don’t do that when you talk about defunding and devaluing the profession, and the areas where we’re recruiting from have shown that they have.”

Knezovich confirmed the effort Spokane County leaders have made to support law enforcement as they seek to recruit applicants from near and far.

“We do really support our law enforcement here, and it’s basically of putting money where your mouth is,” Knezovich said. “We’re willing to pay to get the best and the brightest from around the United States to come work for us.”

Hiring and retaining officers have been an ongoing issue in the liberal state capital of Texas. Joseph Chacon, the interim police chief in Austin, previously said the department has 1,809 positions, and 1,650 are filled. He added that APD is losing an average of 15 officers per month.

While Knezovich’s hiring efforts are admirable, Spokane County is unfortunately situated in a state that has reformed law enforcement in ways that are unconscionable.

For instance, the state of Washington discarded “reasonable suspicion,” which is a standard used in criminal procedure when determining the legality of a police officer’s decision to perform their duty. Without it they are severely handicapped in catching criminal violators or obtaining help for the mentally ill, Law Officer reported.

Furthermore, among 14-police reform laws passed by the Democratic-run Washington state legislature, is eliminating some military safety equipment, which somehow led to banning less-lethal shotguns that launch beanbag and foam-tipped rounds. The legislature claimed it was an “oversight” yet they refused to immediately rectify the problem.

As a result, the Washington State Patrol pulled more than 1,000 less-lethal weapons from service since the department is unwilling to put officers in legal jeopardy. The state patrol was joined by many sheriff’s departments, including two of the largest in King and Snohomish counties.

Consequently, the state of Washington has become a “safe-haven” for criminals due to its reforms — especially the elimination of “reasonable suspicion,” according to Law Officer.

So perhaps this is why Knezovich needs to go outside the state to recruit deputies, since cops in Washington state know they been hamstrung by state leadership, the same kind of politicians currently running the city of Austin.

Therefore, the decision might come to this: Would you rather work for a liberal city in a conservative state, or conservative county in a liberal state? What do you think?