The Democratic-run legislature refuses to fix the problem until 2022 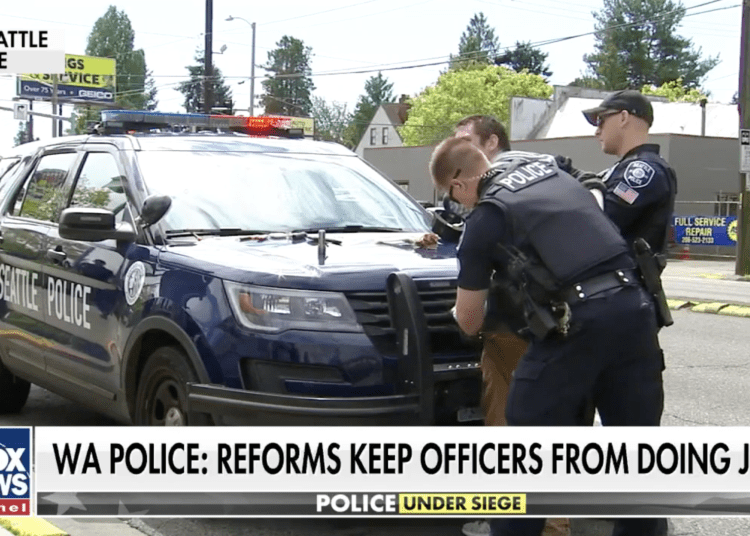 OLYMPIA, Wash. — The Democratic-run Washington state legislature passed 14 police reform laws in the last session. The more that is discovered about their knee jerk reaction to pass police reform laws following the death of George Floyd, the more we learn that violent criminals are the beneficiaries of their anti-police actions.

For instance, the state has foolishly discarded “reasonable suspicion” which is a standard used in criminal procedure when determining the legality of a police officer’s decision to perform their duty. Without it they are severely handicapped in catching criminal violators or obtaining help for the mentally ill, Law Officer reported.

As a result of the latest “reform,” thousands of police officers in Washington state, will possess Tasers as the only less-lethal weapon available to them after legislators admittedly goofed and pulled other options that are universally deemed appropriate, Fox News reported.

The target of the current ban is the use of military equipment, defined in part as firearms and ammunition of .50 caliber or greater. However, after it was signed by Democratic Gov. Jay Inslee, several law enforcement leaders pointed out the law actually bans the shotguns that fire beanbag and foam-tipped rounds. The practical applications are numerous.

Consequently, the Washington State Patrol pulled more than 1,000 less-lethal weapons from service since the department is unwilling to put officers in legal jeopardy. The state patrol was joined by many sheriff’s departments, including two of the largest in King and Snohomish counties, according to Fox.

Snohomish County Sheriff Adam Fortney points out that the absence of these options raises the risk of lethal force.

“If we don’t have that tool, at some point a human has to step in and do that,” said Fortney, “which makes it much, much more dangerous for both the SWAT officers who will be involved and the person we may be trying to take into custody.”

Democratic leaders admit they made a mistake and vow to fix the problem, but not until the 2022 legislative session. In the meantime, the options are removed from the tool belt.

“We went line by line, section by section over this tactics bill and nobody caught it,” admitted Democratic State Representative Roger Goodman. He continued by placing the blame on law enforcement.

“The police didn’t bring it up. We just missed this one,” he acknowledged.

Democrats hold majorities in the state House, Senate and the governor’s office, and have rejected the Republicans plea for an emergency session to fix the faux pas, Fox reported.

Law enforcement officers in the state are feeling betrayed by a political nemesis.

“They handcuffed us,” said Mike Mansanarez, president of the King County Police Officers Guild. “Instead of defunding us, they handcuffed us and stopped us from being able to do our jobs, and keep people safe in the streets.”