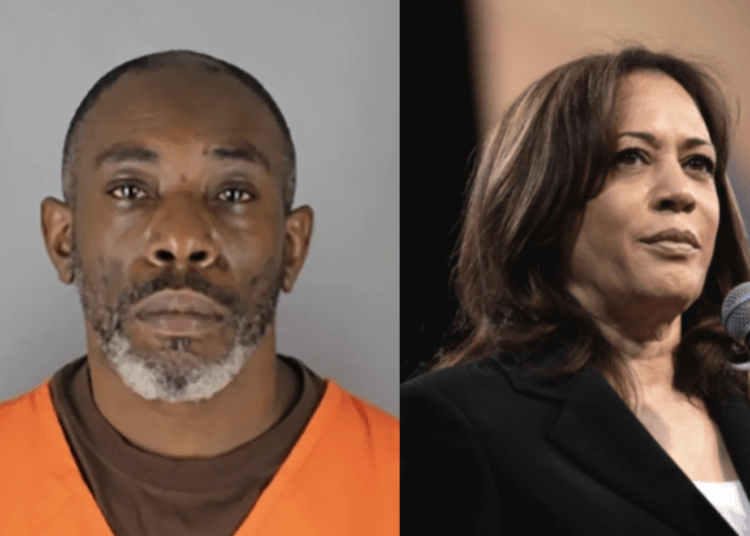 MINNEAPOLIS — The Minneapolis Freedom Fund is a group that took in millions in the days following George Floyd’s death thanks to support from A-list celebrities and political bigwigs, including Vice President Kamala Harris. The fund has been used to bail out violent criminals along with rioters and protesters, Law Officer reported.

One specific individual assisted by MFF was an alleged domestic abuser who is now accused of murder. He was identified as George Howard, according to Fox News.

Minneapolis police say Howard, 48, became involved in a road rage altercation on an Interstate 94 entrance ramp. During the encounter he is accused of fatally shooting another driver. The homicide reportedly occurred weeks after bailing out on domestic assault charges.

According to surveillance footage from the scene, the driver of a blue BMW confronted Howard, who was operating a white Volvo. The victim can be seen punching Howard, then collapsing, KSTP-TV reported.

Luis Damian Martinez Ortiz, 38, was later identified as the victim. He re-entered his vehicle but drove into the median. City officials confirmed his death after he was transported to a local hospital with a gunshot wound to the chest.

In addition to video surveillance, there were witnesses to the homicide. Nevertheless, Howard reportedly blamed the shooting on a mysterious passenger from his car.

When investigators interviewed him, Howard admitted to getting into a road rage incident with Ortiz but initially claimed nothing happened. However, when detectives confronted Howard with the surveillance video, he claimed there was yet another passenger in the Volvo who shot Ortiz from the back seat. Investigators reported Howard was unable to provide identifying information about this additional passenger, KTSP reported.

The Minnesota Freedom Fund posted bond of $11,500 for Howard on Aug. 6 in connection to a domestic violence case, according to Fox.

Howard was charged with second-degree murder in connection to the interstate shooting on Aug. 29.

The Minnesota Freedom Fund tweeted Friday admitting to its role putting Howard back on the streets. On Tuesday, the thread was inaccessible on Twitter but preserved by the Internet Archive.

“We are aware of reports of the tragic and fatal shooting in Minneapolis earlier this week allegedly involving George Howard, an individual the Minnesota Freedom Fund had previously provided with bail support,” the group wrote. “MFF believes that every individual who has been arrested by the law enforcement is innocent until proven guilty, and if a judge deems them eligible for bail, they should not have to wait in jail simply because they don’t have the same income or access to resources as others.” 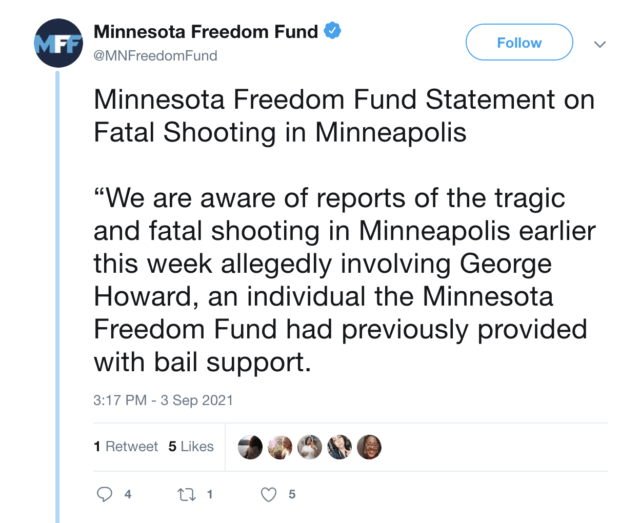 “Under new leadership, MFF has implemented changes to its policies and procedures, and we will continue to assess them to ensure that we are being responsive to the safety and needs of our community,” it said in a follow-up tweet.

The vice president promoted the bail fund during the 2020 campaign. Moreover, she urged her Twitter followers to donate to their efforts last year.

“If you’re able to, chip in now to the @MNFreedomFund to help post bail for those protesting on the ground in Minnesota,” she wrote, linking to the group’s donation site on ActBlue, a Democratic PAC.

If you’re able to, chip in now to the @MNFreedomFund to help post bail for those protesting on the ground in Minnesota. https://t.co/t8LXowKIbw

However, Harris isn’t quite as vocal now as a spokesperson for the vice president declined to comment Tuesday, Fox reported.

The Freedom Fund has been often criticized with reports that it had been bailing out violent criminals.

A report published by FOX 9 of Minneapolis says the fund spent hundreds of thousands of dollars to free an alleged knife murderer and a convicted rapist who was facing charges of sexual assault and kidnapping, among others.