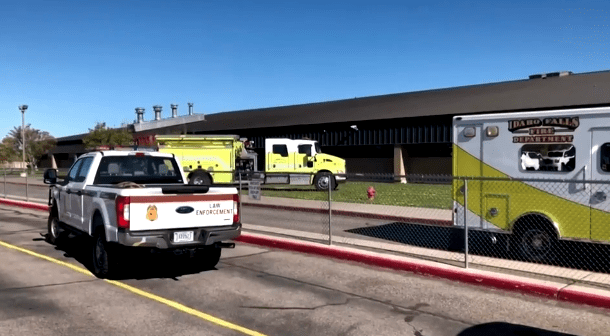 RIGBY, Idaho — A sixth-grade girl was identified as the person who opened fire at an Idaho middle school Thursday, wounding two students and a custodian before she was disarmed by a teacher.

The victims all suffered bullet wounds to their arms and legs, and are expected to survive, officials said at an afternoon press conference.

The student pulled a handgun from her bookbag and fired multiple rounds both inside and outside Rigby Middle School around 9:15 a.m., according to Jefferson County Sheriff Steve Anderson.

The girl was disarmed by teacher Krista Gneiting, according to EastIdahoNews.com.

The unidentified sixth-grader was from the nearby city of Idaho Falls, police said.

Students were evacuated to a nearby high school. About 1,500 kids are enrolled in the middle school, 95 miles southwest of Yellowstone National Park, the New York Post reported.

“Me and my classmate were just in class with our teacher — we were doing work — and then all of a sudden, there was a loud noise and then there were two more loud noises. Then there was screaming,” 12-year-old Yandel Rodriguez said. “Our teacher went to check it out, and he found blood.”

Jim Wilson, the custodian at Rigby Middle School, was wounded when a sixth-grader open fired on May 6, 2021. (GoFundMe)

Police are investigating where the girl got the firearm, and what motivated her to turn it on her young classmates, authorities said.

The custodian who was wounded, identified as Jim Wilson, was treated and released from Eastern Idaho Regional Medical Center by Thursday afternoon, EastIdahoNews.com reported.

One student who was shot in an extremity may need surgery, Dr. Michael Lemon, the trauma medical director of the hospital, said at a Thursday press briefing, according to the report.

Math teacher Krista Gneiting managed to subdue the sixth-grader and held her until police arrived on May 6, 2021. (Photo via New York Post)

The other student was shot in both limbs, according to the doctor.

The incident marked the second school shooting in the small state’s history, and the first since 1999, according to the Post.

In 1989, a Rigby student held a teenager hostage at gunpoint, but police de-escalated the situation before anyone was hurt.