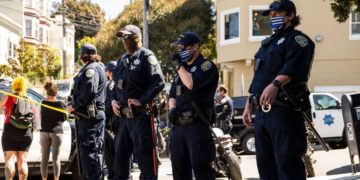 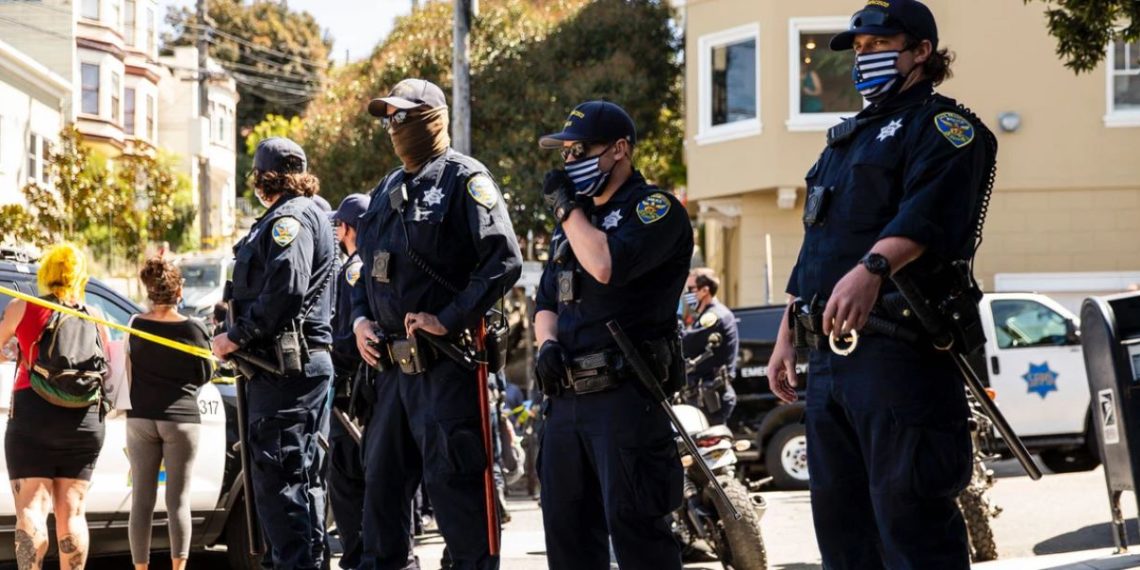 Labeling the face masks the “official mask of the SFPOA,” the San Francisco Police Officers Association made them available for purchase through a new website.

“We’ve received calls from all over the country,” the union wrote on Facebook, adding that 50 percent of sales will benefit a scholarship program for the children of fallen officers. “The outpouring of support has been huge.”

SFPOA President Tony Montoya said that the “Thin Blue Line” flag represents “law enforcement’s separation of order and chaos” in commemoration of officers who died in the line of duty and if we lived in a sane world, it would stop right there.

But this is 2020 and everything triggers literally everyone.

Critics of the flag say it represents white supremacy.

Chief Scott acknowledged earlier this week that “the symbol dates back three decades and was adopted by the National Law Enforcement Officers’ Memorial calling it a, “meaningful expression to honor fallen officers.”

But he went on to say that “symbolism on some of our officers’ face masks may be perceived as divisive or disrespectful.”

And according to Major Travis Yates, Author of “The Courageous Police Leader: A Survival Guide to Combating Cowards, Chaos & Lies,” this is the weakness that is prevailing in far too many of our leaders.

“It is unbelievable to think that this is even an controversy and the fact that you have a police chief that acknowledges he knows what the symbol means but backs down to a few because they don’t like it, is why cops across this country are fleeing the profession,” Yates said.

“Rightfully so, we are asking ourselves, if you can’t stand up to something as stupid as a blue line, what will you do in other situations,” Yates said.

Of course, Chief Scott isn’t alone. In 2017, the Tulsa Fire Chief removed a small blue line from a fire truck after a complaint. Saying at the time, “the fire department has to remain neutral in politics and removing the blue stripe was necessary.”

And straight from that playbook, experts in San Francisco told the San Francisco Examiner that policy bans officers from engaging in political activity while on-duty and the wearing of masks is political. 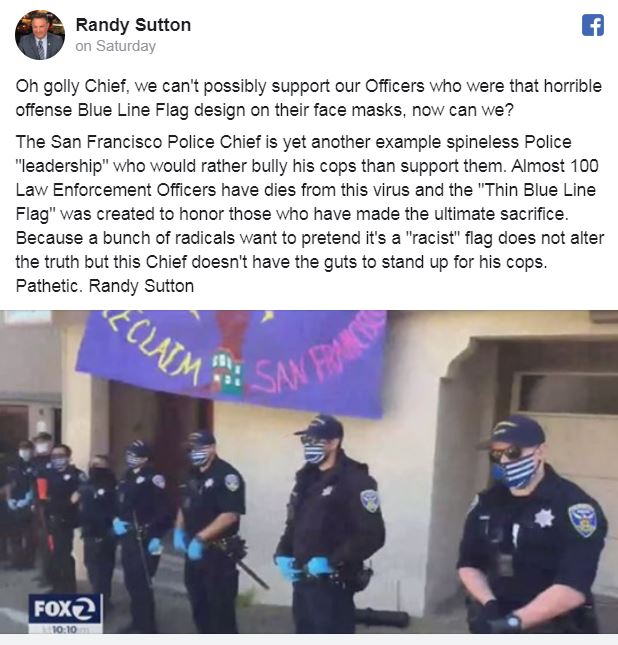 Montoya rightfully blasted Chief Scott for giving in to what he called  “professional protesters,” or the “haters who have made a cottage industry out of carping, complaining, and stereotyping the police.”

“To be clear,” Montoya said, “We absolutely reject any correlation between our face coverings and any group that promotes racism, hate, or bigotry. It is a fact that extremist groups attempt to use well-known symbols to mainstream their repugnant ideas. We repudiate their beliefs and refuse to let them win.”