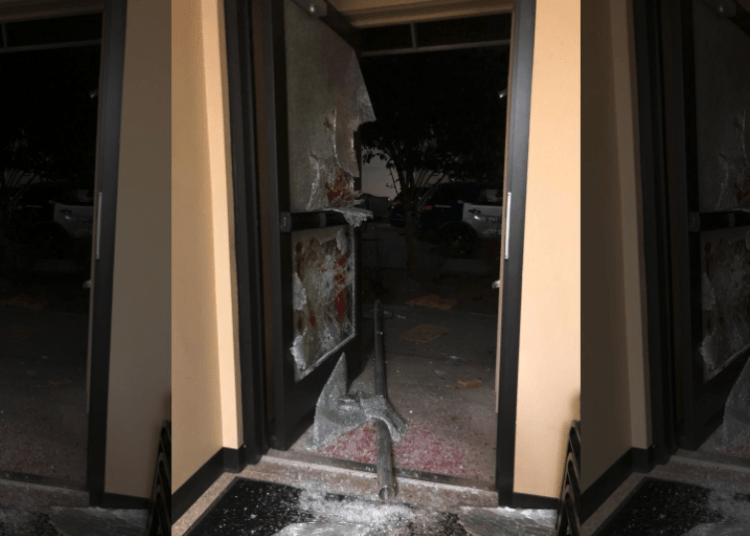 Hundreds of protesters marched to the office building on North Lombard Street near North Campbell Avenue and arrived at approximately 9:45 p.m., at which point police said they blocked “all lanes of traffic” at the intersection, according to information released by the department Wednesday morning.

Police said a “large fire” was started on North Lombard Street soon after the group arrived at the PPA building.

"Every city, every town. Burn the precinct to the ground!" pic.twitter.com/6gnsVWvTfA

“Members of the group started vandalizing the Portland Police Association office with graffiti while others attempted to pull the plywood off of the doors and windows,” police said.

Things escalated late into the evening. Around 11:35 p.m., “the group had set up several barricades and fences along North Lombard Street,” police said. “The group continued to tamper with the doors in an effort to break into the Portland Police Association office and several fires were started in the streets and around the building.”

Early Wednesday morning, around 12:30 a.m., a fight led to gunfire just one block from the PPA office, Fox News reported.

“No one was struck by gunfire and no one would speak to officers regarding the incident,” police said.

Some people put flaming cardboard up against the building. Then the person in the flag cape started putting it out. Some people yelled that they were a cop. pic.twitter.com/HqE4vL0mPm

Shortly after, rioters forced their way into the police association’s office, where police said they damaged the property and “set fire to the building.”

The demonstrations and riots had largely come to a close by 3:30 a.m., according to Fox.

The following is a list of people arrested by the Portland Police Bureau during the evening. They were booked in jail following their arrest: