Her Mercedes smashed into cross traffic traveling at 100 mph 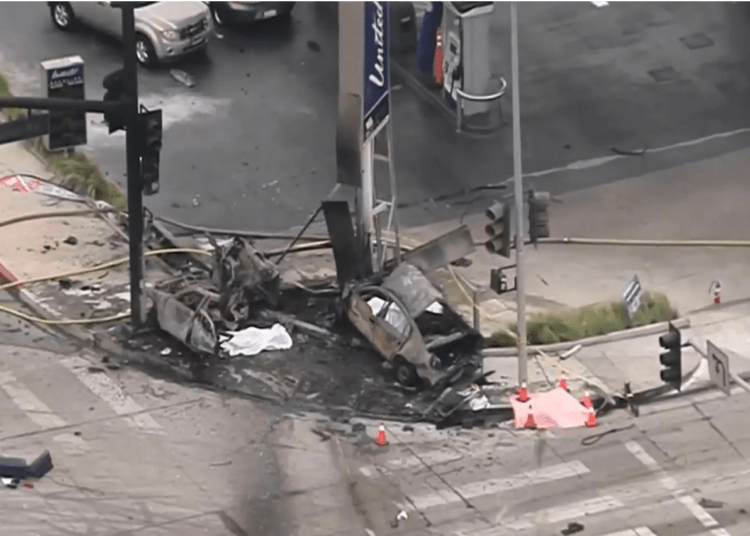 LOS ANGELES – The driver responsible for a massive fiery crash on Friday that killed six people and severely injured eight others was identified as 37-year-old Nicole Lorraine Linton.

The California Highway Patrol forwarded the case to the Los Angeles County District Attorney’s Office and recommended vehicular manslaughter with gross negligence charges, according to KTLA.

Linton is a nurse registered to practice in California and Texas, the Los Angeles Times reported. Investigators believe the woman’s Mercedes was traveling at more than 100 miles per hour in a 35 mph zone when she torpedoed into cross traffic at the intersection of South La Brea and Slauson avenues around 1:40 p.m.

Several people were ejected from vehicles as a result of the horrific collision, and two vehicles were engulfed in flames, according to the California Highway Patrol.

Los Angeles County District Attorney George Gascón said a prosecutor has been assigned to the case and that charges could be presented as early as Monday.

LOS ANGELES – At least six people were killed and eight injured when a speeding driver blew through a red light at a Los Angeles intersection Thursday, ramming into other vehicles and instantly engulfing three in flames. Among the dead are a pregnant woman and a baby.

The crash was reported about 1:40 p.m., when a dark-colored Mercedes flew through a red light — without braking — and struck two vehicles in cross traffic at the intersection of South La Brea and Slauson avenues. The automobiles then careened into a gas station in a ball of fire, KTLA reported.

Surveillance video of the horrific crash obtained by RMG News shows the horrific scene and the subsequent trauma as the impact of the collision shot car parts into the air and immediately set some of the six cars involved on fire.

As vehicles went up in flames a plume of heavy smoke is sent into the sky, video from the scene revealed.

An official with the California Highway Patrol said the Mercedes driver was traveling at a “high rate of speed” at the time of the collision.

The CHP confirmed six people died in the crash, including three adults, one infant, and an unborn child.

Eight injured people were sent to area hospitals and six are children and teens. The driver of the Mercedes is believed to be one of the people sent to the hospital with major injuries, according to the CHP.

The official with the highway patrol said the aftermath of the crash “almost looks like a war zone,” describing a scene of crushed and burned-out vehicles with car parts scattered throughout the street, the New York Post reported.

Witness Veronica Esquival was pumping gas feet away from the collision and said she covered her head for protection as debris and a baby went flying through the air, KTLA reported.

“All of the sudden, a baby literally flew from the middle of the intersection to the middle of the gas station and landed right on the floor in front of me,” Esquival said. “One of the workers came and saw me with the baby and took the baby out of my hands. Somebody tried to resuscitate the baby, but the baby was gone.”

A number of cars were damaged and destroyed, authorities said.

“We have a total of at least six to seven vehicles involved, at minimum, at this time. Three became engulfed in flames,” said CHP spokesman Franco Pepsi.

Alphonso Word said he was only a few cars away from the intersection when the massive crash occurred “like a bomb.”

“Like I say, it’s the kids. That’s what touched me more than anything, the children, the ones that didn’t get a chance. The mother that probably was happy that she’s having a baby,” Word said. 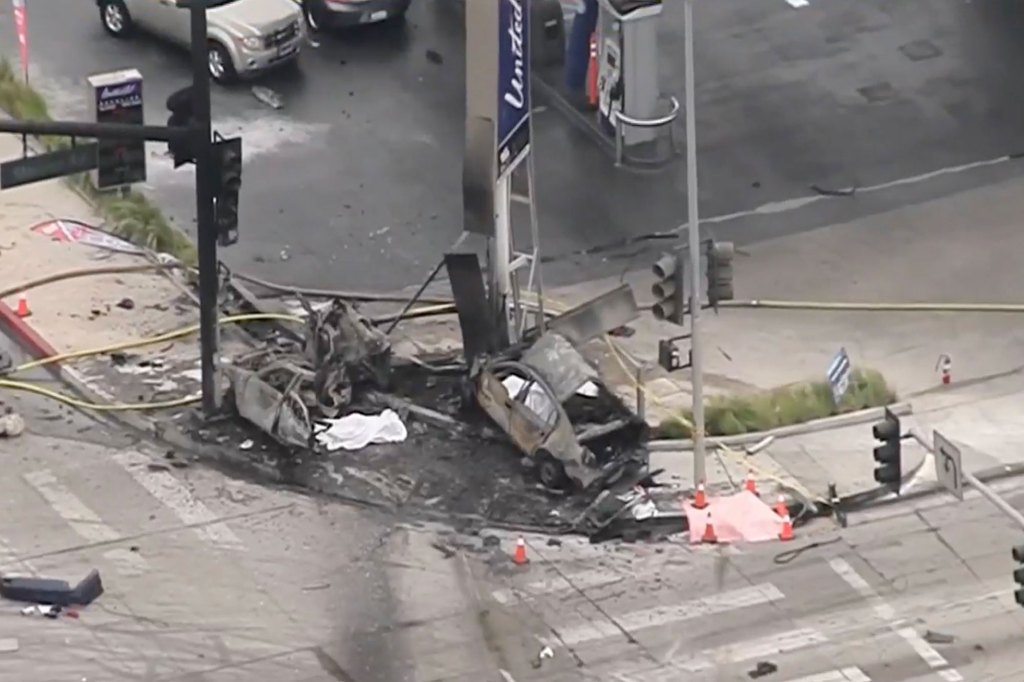 The Windsor Hills intersection remained closed Thursday night and was expected to remain closed for a significant period, including Friday morning as collision reconstructionists investigate.

As CHP investigators continue their work, Pepsi confirmed that the driver is a 40-year-old woman who suffered major injuries while driving “a two-door Mercedes traveling at a high rate of speed southbound on La Brea.”

“Just unknown reasons for the high speed at this time … Everyone needs to drive with more due regard because a lot of collisions happen, and this just happens to be at the top of the list of how bad they can get,” Pepsi said.