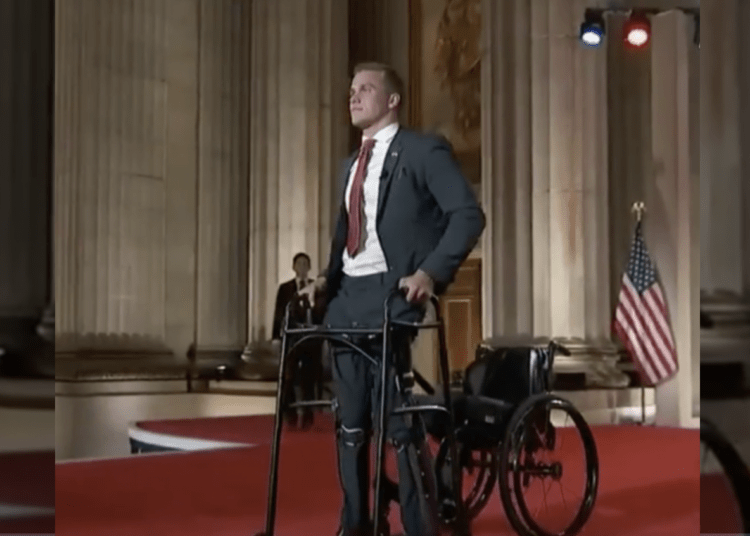 Madison Cawthorn stands at the conclusion of his speech during the Republican National Convention. (File photo)

HENDERSON COUNTY, N.C. — Radical activists are accused of vandalizing the home of Republican congressional candidate Madison Cawthorn and a county GOP office in North Carolina early on Thursday. The crimes were reportedly carried out by Antifa members.

“At 4:55am last morning, activists from far-left fringe Antifa groups acted on the aggressive rhetoric of my opponent and committed gross acts of vandalism and destruction of property across this district,” Cawthorn posted Saturday on Facebook. “My opponent’s strike force inflicted thousands of dollars of damage to both public and private property.”

“The Henderson County GOP office, which was defaced with graffiti, many businesses, and local homes who displayed support for both my candidacy and other Republicans were attacked and their signs defaced,” Cawthorn continued. “Personally, my home was targeted and my property vandalized by thugs acting in support of my opponent’s vision for this district. These left-wing enforcers spray-painted threats of violence and echoed my opponent’s words, as they symbolically crushed my neck and head on each sign deposited on my property.”

“The most disturbing report about last night’s events involves my opponent refusing to denounce these acts of aggressive violence,” Cawthorn added. “Just weeks ago, a well-known reporter was attacked by leftist groups in downtown Asheville, the same groups who have held rallies in support of my opponent, when asked to condemn such violent acts against impartial members of the media my opponent was silent. Today my opponent is silent again. Rest assured that attempts to silence our message of hope for this district will not succeed. Let us continue to pray for these troubled people that they may find peace,” Daily Wire reported.

Cawthorn then posted images of defaced campaign signs that accused him of being a “liar,” having no soul, being a “wannabe corporate shill,” and selling his soul.

Posted by Madison Cawthorn for Congress on Saturday, October 10, 2020

The congressional race between Cawthorn and Democrat Moe Davis, a retired Air Force colonel, has drawn national attention after the 25-year-old Cawthorn defeated a Trump-backed candidate in a June runoff primary election. Since then, the race has become acrimonious.

As The Daily Wire reported, Cawthorn hit at Davis after his inflammatory tweets resurfaced:

Davis also described in graphic detail what he imagines as the proper punishment for “extremists” in the North Carolina Republican Party. “Screw they go low, we go high bullsh*t,” Davis tweeted a year ago in a tweet that is still up as of publishing. “When @NCGOP extremists go low, we stomp their scrawny pasty necks with our heels and once you hear the sound of a crisp snap you grind your heel hard and twist it slowly side to side for good measure. He needs to know who whupped his ass.”

Among other tweets Davis has yet to delete since filing to run to replace White House Chief of Staff Mark Meadows in Congress, he seemed to question Secretary of State Mike Pompeo’s Christian faith and also attacked the boys from Covington Catholic High School by calling them a variation of maggots.

“If you think you’ve been called by Christ while you’re serving as the lead fluffer for the profane, serial adultering, immoral, habitual lying, narcissistic, draft-dodging, grifter [Trump] then it’s obvious Jesus butt-dialed you by mistake,” Davis tweeted about Pompeo.

Regarding the Covington boys, Davis wrote on Jan. 19, 2019, “This is how the [Trump] MAGAts treat an American Veteran. It’s time to kick him and his immoral minority to the curb.” Nicholas Sandmann, the most visible boy from that incident, recently settled a defamation lawsuit against The Washington Post for $250 million.

Cawthorn, who was partially paralyzed in a 2014 car accident and uses a wheelchair, spoke at the Republican National Convention in August, Law Officer reported. He closed his speech by urging Americans not to “cower to a mob,” and to “kneel before God but stand for our flag.”