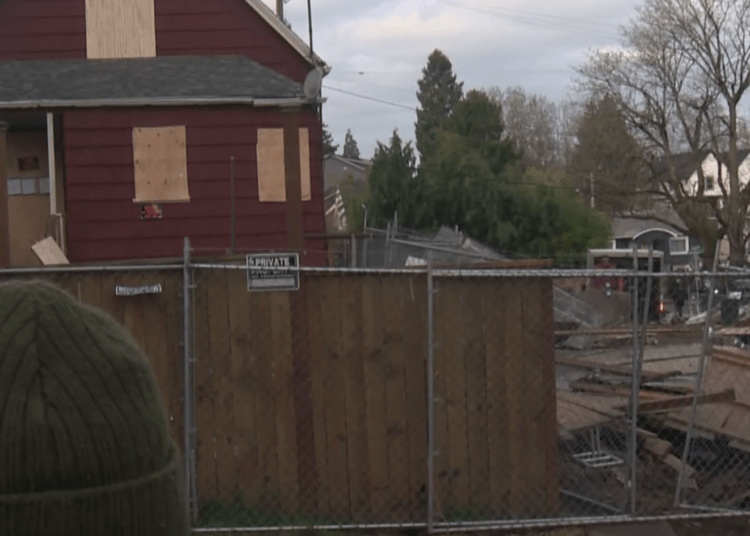 Portland "Red House" at center of occupation crisis in the beleaguered city. (OPB.org)

PORTLAND, Ore. — The Portland police chief said Wednesday that he remained “greatly concerned” about an area occupied by “demonstrators” attempting to block the eviction of a Black and Indigenous family, explaining that individuals have stockpiled weapons, assigned armed guards and spray-painted threats to kill police officers at the so-called “Red House” on Mississipi Avenue.

“We want a peaceful & safe resolution to the occupation of public space on N Mississippi Ave,” Chief Chuck Lovell said on Twitter Wednesday. “We are greatly concerned about the fortification of barricades, stockpiling of weapons, armed sentries, attacks on journalists & threats to kill officers in graffiti in this public space.”

We want a peaceful & safe resolution to the occupation of public space on N Mississippi Ave. We are greatly concerned about the fortification of barricades, stockpiling of weapons, armed sentries, attacks on journalists & threats to kill officers in graffiti in this public space

Residents neighboring the property have been boarding up their homes and erecting fencing around their own properties amid concerns about “threatening behavior and intimidation they’ve experienced” over the past three months, according to the Portland Police Bureau.

The occupation continued early Wednesday and individuals remained overnight, Fox News reported. Police were not at the scene overnight, but the bureau tweeted Wednesday that demonstration liaison officers were available to communicate with those at the house.

Demonstration Liaison Officers are available to communicate with those involved in occupying the public and private property on N Mississippi Ave. Contact them at: [email protected]

Portland activists illegally occupying the so-called “Red House” claim two sons of the previous homeowners were among those arrested Tuesday, as Mayor Ted Wheeler directed police to take “all lawful means” necessary to ensure there is no autonomous zone in the city.

However, Wheeler has often been critical of force used by law enforcement authorities when combatting civil unrest and rioting, so who knows what he defines as “all lawful means.”

I am authorizing the Portland Police to use all lawful means to end the illegal occupation on North Mississippi Avenue and to hold those violating our community’s laws accountable. There will be no autonomous zone in Portland.

Several others were arrested Tuesday, including one person who was spotted with a firearm. Law enforcement also learned the home was broken into and that people were entering and exiting despite a judge’s order, Fox reported.

Since September, individuals have been trespassing on the home’s front and backyards and camping on adjacent privately owned and city-owned properties, the Multnomah County Sheriff’s Office said.