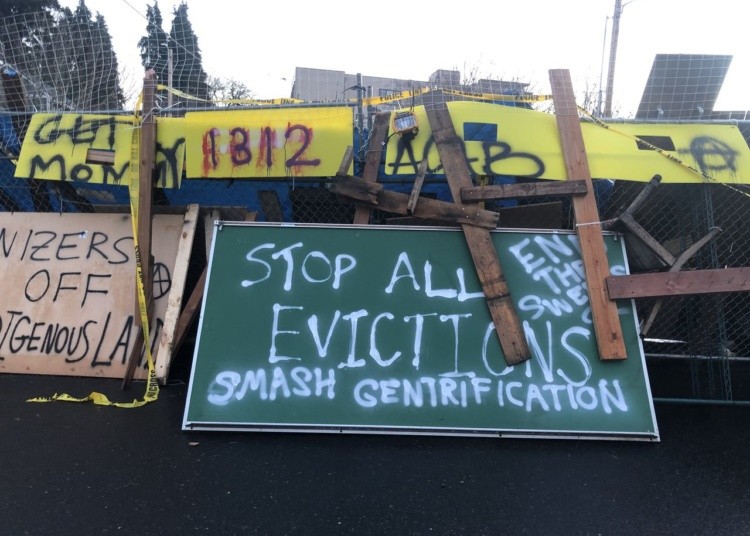 Portland Mayor Ted Wheeler has reportedly apologized for sending members of law enforcement to dismantle an “occupied zone” set up around a foreclosed residence last week and is now deep in negotiations with both the owners of the home, known as the “Red House,” and the occupiers themselves.

As reported by The Daily Wire,  Wheeler ordered members of the Red House “autonomous zone” to leave or face eviction by force after protesters, who had been “occupying” the the land around Red House for several weeks, set up makeshift barriers and declared the space “indigenous land.”

“Portland Mayor Ted Wheeler authorized Portland police to use ‘all lawful means’ to clear protesters from a home on North Mississippi Avenue Tuesday evening,” Oregon Public Broadcasting reported last week “The house has been the site of protests for months as demonstrators rally against the eviction of a Black and Indigenous family.”

The antifa autonomous zone in Portland now has at least six barriers. The trespassers they are protecting at the “Red House” has received over $300,000 in donations even though they own a second house. Photo: Oregonian pic.twitter.com/91TO2kW1me

Police Chief Chuck Lovell also told local media that “occupiers” had a stockpile of weapons and that the autonomous zone was a threat to safety. Calls, he said, had been made to local law enforcement concerning “reports of fights, shots fired, burglary, theft, vandalism, noise violations, trespassing, and threats” within the ongoing protest.

Now the group says the mayor has apologized for the incident and is in negotiations with both protesters and the home’s owners.

“The barricades are coming down, Ted Wheeler has apologized, and Portland Police has promised not to attack supporters,” a Twitter account associated with the protest said. “It also asked ‘comrades’ to come down to 4406 N. Mississippi Ave as soon as possible to bring ‘all hands on deck’ to ensure the barricades come down.”

Wheeler confirmed the negotiations — and a subsequent deal — in a statement made over the weekend.

RAPPER GUNNED DOWN ON STREETS

“This agreement is an important step toward de-escalation and a long-term resolution for the neighborhood and the Kinney family,” he said. “I maintain measured optimism that we can accomplish this step and move toward the next steps to advance the safety and well-being of the family and the safety of the neighborhood.”

“I also want to acknowledge the neighbors and the challenges this situation created for them,” Wheeler added.

The police department also issued an apology, according to emails obtained by Fox News.

“We apologize and understand that following our tweets earlier this week that your family received threats,” a letter from police chief Lovell to protesters and the Kinney family read. “We did not intend to attract attention that results in threats of harm and violence to your family or that escalated tensions in our community. Nobody should be subjected to this kind of stress and harm, and we apologize for the role our tweets played in this.”