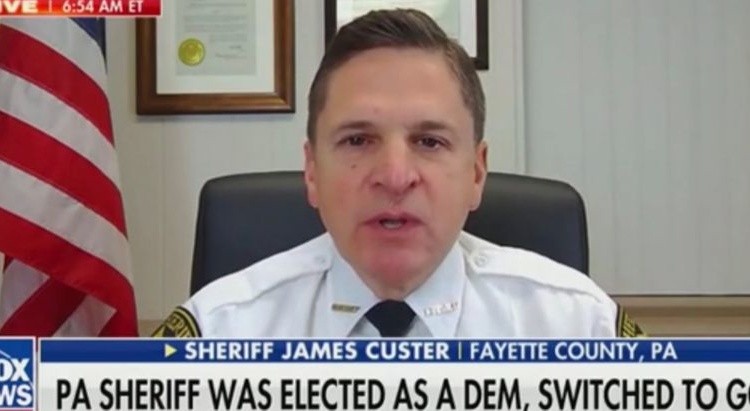 A sheriff in Pennsylvania told “Fox & Friends” on Monday that he changed his political affiliation to Republican because of the “shift in ideals of the Democratic Party at the national level,” including a “socialist agenda.”

Fayette County Sheriff James Custer said that he considered the move for several months and that the restrictions put into place during the COVID-19 pandemic helped influence his decision.

“It probably started back when the pandemic started and the mandates coming down by the Democratic governors,” Custer said, noting that he feels those orders “are unconstitutional.”

He went on to say that, as a sheriff, it is his “duty” to “protect, serve and uphold and defend the Constitution of the United States” and he believes the “mandates being brought down on our citizens” are “unconstitutional.” Custer stressed the importance of “being able to protect their rights and freedoms under the Constitution.”

Democratic Governor Tom Wolf held a press conference on Thursday afternoon announcing the newest rules, which include a ban on all indoor dining, as well as closing gyms, theaters and other indoor entertainment for three weeks. Outdoor dining and takeout are still allowed to remain open.

Additional temporary restrictions were revealed, which limit gathering sizes to 10 people inside and 50 outdoors, and ban spectators from attending in-person professional and collegiate sports. High school and youth sports have been suspended.

The new rules will go into effect 12:01 a.m. Saturday and remain in place until 8 a.m. Jan. 4, according to a tweet from the governor.

On Monday, host Ainsley Earhardt asked Custer if the “defund the police” agenda factored into his decision to switch parties. Custer, who noted that he has more than 30 years of experience in law enforcement, replied that it was “a definite factor.”

“Starting back from the George Floyd incident and all the civil unrest and the calls for ‘abolish the police,’ ‘defund the police’ that was part of factoring in to my decision that, ‘hey, this is not what I signed up for,’” Custer told Earhardt.

Floyd’s death in Minneapolis police custody in May sparked a rallying cry from thousands of protesters, politicians and community leaders across the country to defund or dismantle police departments.