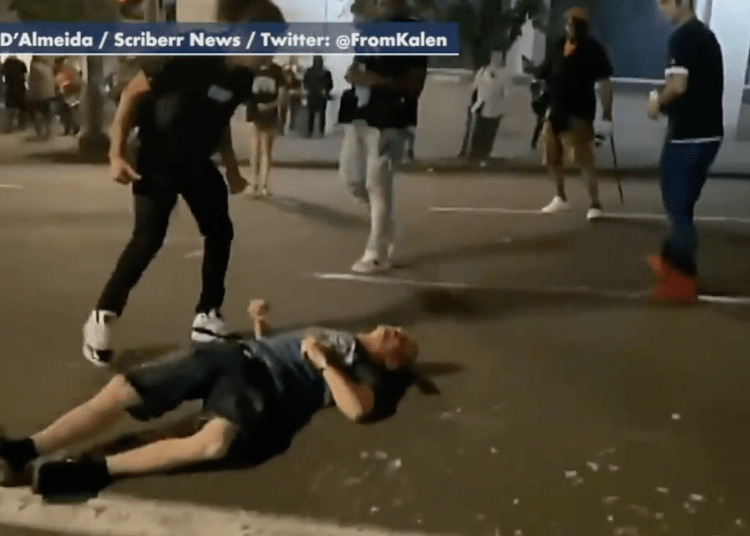 A suspect identified as Marquise Love right after he was recorded kicking Adam Haner in the head. (Twitter)

PORTLAND, Ore. — A man who recorded the moment a person was viciously beaten by rioters Sunday night near a federal courthouse in Portland, Ore., said the city now feels like a “third world country.”

Drew Hernandez told Fox News the man was possibly defending a transgender being battered and robbed by Black Lives Matter protesters when the mob turned their attention to him and his female companion. He got into the truck and drove away as he and the woman were being attacked, Hernandez said.

“I think he just felt extremely threatened,” Hernandez told Fox News’ Dan Springer. “They chased him… until he finally crashed. When they finally caught up to him, they went nuts.

“This was violent, extremely violent,” he said. “Sometimes I forget I’m walking the streets of an American city in the Northwest. Sometimes it feels like you’re walking in a Third World county.”

A video posted online shows a man sitting dazed on the ground moments before another man runs up from behind and kicks him flush in the face, apparently knocking him out.

One witness called police to report up to 10 people “beating the guy,” authorities said Monday.

The suspected attacker who kicked the man remains at large. The Portland Police Bureau told Fox News that the investigation is ongoing and the victim is recovering.

“PPB Assault Detectives are actively investigating this alarming incident that resulted in a man being hospitalized,” the chief wrote. “If anyone has information about this event please reach out. Public safety is up to all of us.”

PPB Assault Detectives are actively investigating this alarming incident that resulted in a man being hospitalized. If anyone has information about this event please reach out. Public safety is up to all of us.

Violence erupted Sunday as protests got underway in what has become a nightly occurrence. Mobs of protesters have attacked random bystanders and dished out beatings for no reason, Hernandez said.

“It’s literally like just one thing after another, he said. “Just these random people, they start physically assaulting.”

He said the man seen in the video was near a convenience store away from the protest when the attack occurred. He was taken to a hospital with non-life-threatening injuries and is recovering, police said Monday in a news release.

The attack comes as Portland continues to grapple with nights of unrest that have increasingly turned violent, leading to shootings, assaults, arson and the hurling of deadly objects at police officers.

Hernandez described the environment in Portland since protests begin weeks ago to developing countries where violence is widespread, according to Fox.

“There’s this sense of fear because the people are unpredictable because the crime rates are high and police aren’t there to save you,” he said. “That’s kind of the feeling that I get when I’m walking the streets of Portland.”

UPDATE: Portland police on Tuesday identified a suspect in Sunday night’s attack on a truck driver who was seen on video being pulled from the vehicle and violently beaten.

Portland Police Bureau is on the hunt for Marquise Love, who also goes by the name “Keese Love,” for his alleged involvement in the vicious assault that was caught on video and circulated on social media.

Officials said in a press release they have made several attempts to reach 25-year-old Love, but have so far been unsuccessful. They have said they have probable cause for his arrest.