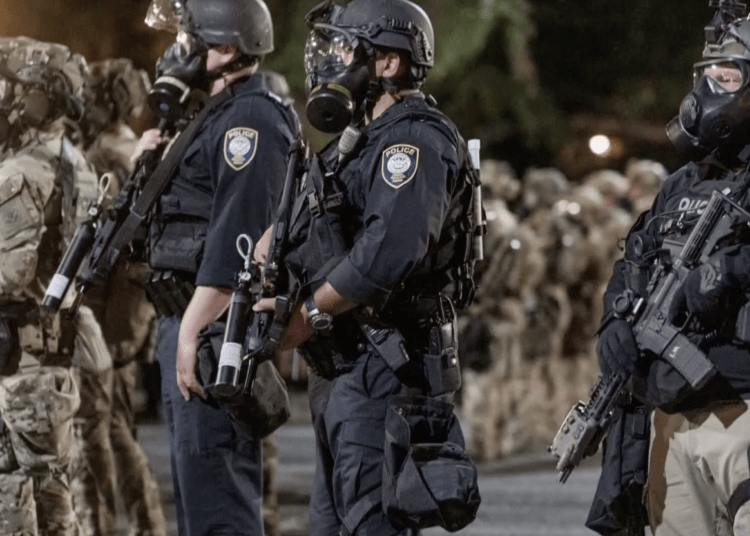 PORTLAND, Ore. – There is a rebellion of sorts at the Portland Police Bureau as the Rapid Response Team, a specialized unit within the agency, voted unanimously to resign on Wednesday. The group decision follows the criminal indictment of an officer for assault stemming from a riot in August 2020, sources within the police agency told The Post Millennial.

Rapid Response Team members volunteer for the assignment, and are deployed during all manner of civil unrest and rioting in Portland.

“So, what typically happens, is the riot team gets called out to be prepared for a huge protest. Then patrol officers from all three precincts are on standby which gets activated when the protest starts. This means all patrol calls go to ‘priority calls only,’ basically only active assaults, shootings, and person crimes only get responded to. All other calls hold indefinitely until the protest is over or the next day,” police sources told The Post Millennial.

The Multnomah County District Attorney’s Office charged Officer Corey Budworth, a member of the Rapid Response Team, with one count of fourth degree assault—a misdemeanor—on Tuesday. This comes after DA Mike Schmidt has been heavily criticized for his passive approach to prosecuting rioters in the past year.

For example, in October 2020, Schmidt rejected over 540 riot related cases in the “interest of justice” as he essentially implemented catch-and-release policies for accused criminals and rioters. Hence, the appeasement has led to ongoing violence and mass property damage, according to law enforcement experts.

The incident which led Budworth’s indictment occurred during the evening of August 18, 2020. Antifa militants threw a Molotov cocktail into the Sheriff’s Department Headquarters as the Rapid Response Team struggled to contain the riot, Post Millennial reported.

Schmidt released a statement, which said, “In this case, we allege that no legal justification existed for Officer Budworth’s deployment of force, and that the deployment of force was legally excessive under the circumstances. My office will continue to do everything we can to ensure justice is done without error or delay and that we make sure our work and practices are rooted in fairness and equity.”

His assertion is laughable to those who’ve followed the criminal violence in Portland. Dissenters argue, “There’s been no justice without error or delay when it comes to Portland rioters.”

The “victim” in Budworth’s case is “activist photographer” and rioter Teri Jacobs. The officer is accused of striking her in a criminal manner with a baton.

Videos posted (without full context) to social media allegedly shows Budworth hitting Jacobs in the head from behind, then again as she falls to the ground, OPB reported.

Cops are tackling and arresting people for having shields. Then pepper spray a young girl. pic.twitter.com/uH9Fcvgvdy

The police union is unhappy with the criminal charge being levied against Budworth.

“Unfortunately, this decorated public servant has been caught in the crossfire of agenda-driven city leaders and a politicized criminal justice system,” the union wrote in a statement, describing Jacobs as a “criminal rioter.”

A police source within the agency told The Post Millennial that Budworth’s indictment is a blatant attempt to “hold police accountable,” stating “no victim came forward.” Instead, sources say an attorney saw the video and approached Jacobs about pursuing charges against the Budworth.

“Now that the riot team is no more, we have no clue what’s going to happen. We don’t have enough patrol officers to be pulled from the road to handle huge crowds,” a Portland police officer said. “We are only backups with no gear like the riot team has.”

Portland Police Association Executive Director Daryl Turner referred to the indictment as a “witch hunt” during a local broadcast on Wednesday.

How this will play out is anyone’s guess with more protests looming this weekend.