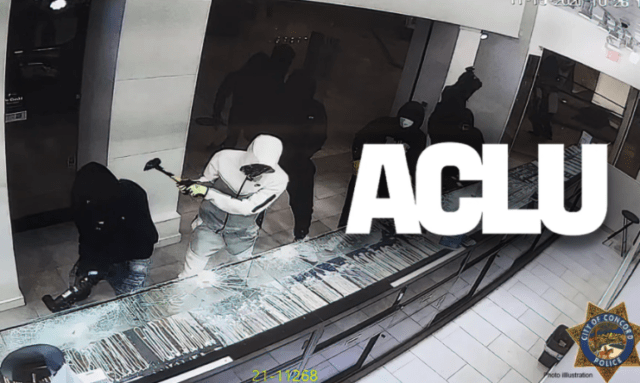 Security footage of a smash-and-grab robbery. (City of Concord PD)

California has suffered a rash of flash mob robberies in recent weeks. The crime trend is now spreading to other states. Police union leaders are speaking up and blaming the ACLU for the indefensible crimes that are quickly becoming a plague to businesses as well as public safety ahead of the holiday shopping season.

“One does not need to be clairvoyant to have predicted that in California the ACLU’s Proposition 47 would turn a family trip to the mall or a Home Depot into a dangerous gamble for our residents.”

The Los Angeles Police Protective League is not alone is their assessment. They are among a list of police unions that are sponsoring a website called ACLU Watch. It is “dedicated to fighting for victim’s rights, accountability for criminals, and exposing those that defend the indefensible.”

Joining the LAPPL are the following police associations:

The website launched earlier this week. The voting public is frequently duped by major funding that is funneled into political campaigns that compromise public safety. Therefore, the website includes informative data that helps educate citizens on issues that impact their quality of life.

Several high-end California businesses have been targeted with repeated instances of smash-and-grabs in the last two weeks. A multitude of suspects are making off with thousands of dollars in expensive merchandise from stores. (i.e. They are not stealing milk and diapers for their babies.) Moreover, employees are suffering harm in some cases.

In one of the initial high-profile cases, a mob of about 80 people wearing ski masks and holding crowbars stormed a Nordstrom location in Walnut Creek, which is an affluent area about 25 miles outside San Francisco. The thieves ripped off about $200,000 in merchandise.

One of the biggest political cons perpetuated on California voters was Proposition 47, which passed in 2014. Part of the new law raised the threshold for theft. Now a shoplifter could steal up to $950 and not worry about being charged with a felony (unless the elements of robbery are present). In some jurisdictions — like San Francisco — the amount appears to be irrelevant as the destructive District Attorney Chesa Boudin sees criminals as victims and fails to file charges in most cases. Walgreens has actually closed 22 stores in San Francisco in the last five years due to unabated theft, Law Officer reported.

Among the influential political organizations that supported the measure was the ACLU, Fox reported.

“Californians have an historic opportunity to bring about needed and long-overdue criminal justice reform by voting Yes on Proposition 47,” ACLU NorCal wrote in a post in 2014.

“If it passes, California will lead the nation in ending felony sentencing for the lowest level, non-violent crimes, permanently reduce incarceration and shift $1 billion in the next five years alone from the state corrections department to K-12 school programs and mental health and drug treatment,” the post continued.

The con job worked. California voters thought it sounded like a good idea to provide more money to “K-12 school programs and mental health and drug treatment,” so they went for it.

However, six years later, police leaders are saying the ACLU “lied” to voters about the ballot measure.

“San Francisco voters were lied to by the ACLU. Voters were told that prosecuting thieves was really a racist attack on people of color whose only real crime was poverty.  So Proposition 47, the so-called Safe Neighborhoods and Schools Act, lowered felonies to misdemeanors for theft of goods valued at $950 dollars or less,” San Francisco Police Officers Association President Tony Montoya told Fox News Digital.

“Talk about rolling out the red carpet for criminals, these smash-and-grab thieves aren’t stealing groceries to feed their families, they are ransacking and clearing out high-end stores to sell those goods to the highest bidder to fuel their criminal behavior or their drug habits.”

The president of the San Jose Police Officers Association, Sean Pritchard, told the news outlet that the ACLU is also pushing for reduced bail initiatives and cited the case of Waukesha Christmas parade suspect Darrell Brooks, who was released on low bail twice this year. Furthermore, “the entire system” in Wisconsin was polluted with people who worked hard to “decarcerate” the likes of Brooks and others.

These “programs” sound noble on paper, but when you put a face and a name attached to a long rap sheet to it, suddenly it sounds idiotic. That is what police understand that most citizens do not. That is why they get duped by things like Prop 47.

“Across the country the ACLU is pushing for no bail or drastically reduced bail similar to what the hate-filled repeat offender Darrell Brooks was out on prior to him running down and killing innocent people at the Waukesha, Wisconsin, Christmas parade,” Pritchard said. “If Brooks was held in custody for his most recent offense on a bail amount commensurate with his extensive criminal history then those innocent parade goers would be alive today.”

Seattle is another example of left-wing politicians who are hurting their community. They championed the “defund the police” movement last year. Fortunately, many progressives were defeated in last month’s election by moderate candidates who advocated for adding police officers to the department.

“Seattle voters just rejected the socialist anti-public safety agenda promoted by the ACLU, it is no accident,” Mike Solan, president of the Seattle Police Officers Guild, told Fox News. “When residents of any city do not feel safe walking down the street, don’t feel safe shopping or traveling throughout their city, then society is broken. The truth is that the ACLU and other like-minded organizations have abandoned all pretense of what is right and wrong and strictly focus on how to help criminals at the expense of crime victims…they have lost their way.”

Gov. Newsom recently called on California’s mayors to “step up” and hold the shoplifting mobs accountable.

“I’m not the mayor of California, but I was a mayor, and I know when things like this happen, mayors have to step up,” Newsom said last Monday. “That’s not an indictment. That’s not a cheap shot.”

Actually, Newsom demanding “accountability” for criminal conduct sounds more like a joke then actual guidance since he’s done almost nothing in his political life to hold offenders responsible for their actions.

Days after the governor’s comments, the crimes continued over Thanksgiving weekend and even left a former police officer who was working as a security guard in Oakland dead.

Kevin Nishita was shot and killed by suspects committing an armed robbery while he was protecting a news crew covering a previous smash-and-grab theft, Law Officer reported.

“It is with the deepest sadness that I let you know security guard Kevin Nishita has passed away,” said Mark Neerman, vice president of news and news director at KPIX. “He died protecting one of our own, a colleague reporting on the very violence that took his life. I know you join me in sending condolences to his family and in sending thanks to Kevin for standing up for us all.”

Actually, he didn’t just “pass away.” He was MURDERED. It’s sad that a news organization had to soften the reality of this barbaric crime.

A spokesperson for Newsom’s office provided another comment that rings hollow with the criminal element since it does nothing to actually hold criminals accountable for their actions.

“The Governor expects these perpetrators to be prosecuted and held accountable for their crimes. He has also taken immediate action to increase CHP presence on highways near popular shopping areas statewide. This year, Governor Newsom signed legislation to extend the California Highway Patrol Organized Retail Crime Task Force, and he is committed to taking additional action in his January budget.”

Fox News sought comment from the ACLU, but did not immediately receive a response.