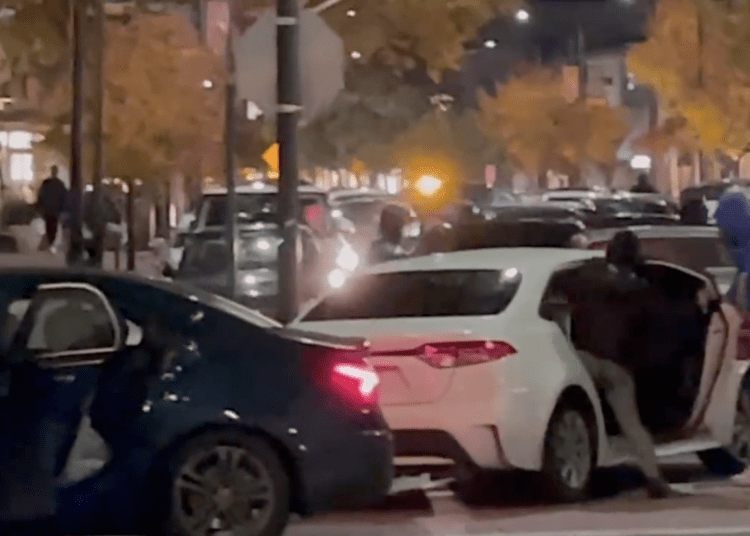 A mob of about 80 lawless looters ripped off a Nordstrom store in Northern California. (Twitter)

WALNUT CREEK, Calif. — A  mob of about 80 criminals dressed in hoodies and ski masks ransacked a Northern California Nordstrom. The scene was described by witnesses as “insane” and like something “out of a movie.”

The mass crime spree took place before 9 p.m. Saturday evening in the affluent City of Walnut Creek, which is across the bay about 25 miles outside of San Francisco.

Jodi Hernandez, a local reporter, tweeted footage of the uncivilized scene. She said about 25 vehicles pulled up outside of the Nordstrom before people ran into the store, grabbed merchandise before quickly making their getaway, Fox News reported.

#Breaking About 25 cars just blocked the street and rushed into the Walnut Creek Nordstrom making off with goods before getting in cars snd speeding away. At least two people arrested at gunpoint. pic.twitter.com/AG3R94M9L3

Dozens of police units arrived to quell the criminal onslaught. Lt. Ryan Hibbs of the Walnut Creek Police Department told the media that looters smashed shelves during the violent thievery. Criminals grabbed loot and quickly returned to their cars while carrying bags and boxes.

Patrons at nearby PF Changs viewed the lawlessness from restaurant windows, according to manager Brett Barrette. He had to lock the doors at the business as a precaution in case the suspects streamed into the establishment.

“We probably saw 50 to 80 people in ski masks crowbars a bunch of weapons. They were looting the Nordstrom’s right here. And I thought they were going to start beating cars. I had to start locking doors lock the front door lock the back door,” Barrette told KGO. “You never know, they could come right in here. It was crazy … All the guests inside were getting concerned. It was a scary scene for a moment.”

“There was a mob of people,” Barrette added to CBS San Francisco. “The police were flying in. It was like a scene out of a movie. It was insane.”

Nordstrom in Walnut Creek, California, was victimized by dozens of criminals. (Google Maps )

During the series of crimes, one Nordstrom employee was pepper sprayed and two others were punched and kicked. They were treated and released at the scene, WCPD said.

It’s unclear how much merchandise was stolen, NBC News reported.

Lt. Hibbs noted that a few arrests were made. Two people in a car were stopped and taken into custody, a male and a female. The male was booked for robbery, possession of stolen property, conspiracy to commit burglary and possession of burglary tools. The woman was charged with unlawful possession of a firearm.

A third suspect was also corralled and booked for robbery, possession of stolen property, conspiracy to commit burglary and possession of burglary tools.