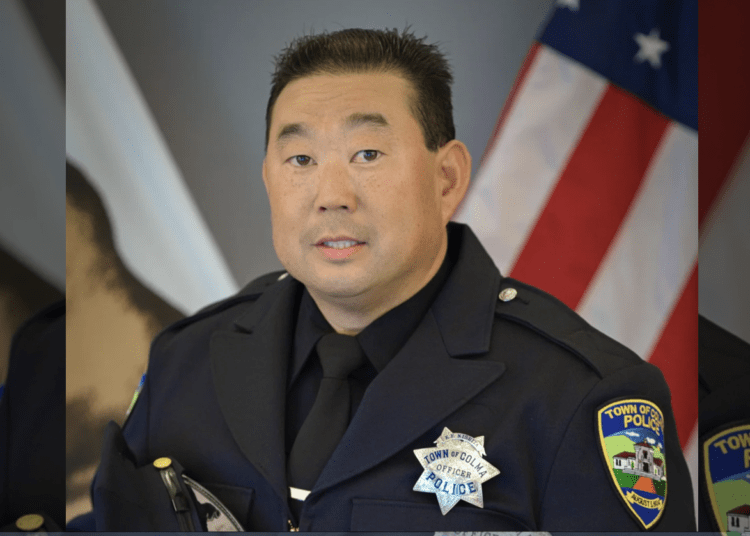 Kevin Nishita was a retired police officer who was working as a security guard when he was shot. (Colma Police Department)

A man working a security detail has died after he was shot while protecting a San Francisco Bay Area television news crew covering a smash-and-grab theft, part of a rash of organized retail crime in the region.

“We are devastated by the loss of security guard and our friend, Kevin Nishita. Our deepest sympathy goes to Kevin’s wife, his children, his family, and to all his friends and colleagues,” KRON-TV’s vice president and general manager, Jim Rose, said in a statement issued Saturday.

The retired police officer was an armed guard for Star Protection Agency and provided security for many reporters in the region, Fox News reported.

He was shot in the abdomen during an attempted robbery of KRON-TV’s camera equipment near downtown Oakland on Wednesday, police said.

A reward of $32,500 is being offered for information that leads to an arrest in Nishita’s murder.

Nishita worked as an officer for the Colma Police Department during his time on active duty. He was a father of two and grandfather of three, The Sun reported.

OAKLAND, Calif. — An armed security guard that was protecting a local news crew was shot on  Wednesday afternoon according to FoxLA. The guard, who has not been identified, was shot during an attempted robbery according to the Oakland Police Department.

The shooting was reported about 12:30 p.m. in the 300 block of 14th and Webster streets in downtown Oakland.

A KRON 4 news crew was in the area covering the rash of retail thefts around the Bay Area when the guard was shot in the abdomen.

The guard is listed in stable condition at an area hospital.

No other members of the news crew were harmed, KRON 4’s Vice President and General Manager Jim Rose said in a statement.

Many local news agencies routinely assign guards to accompany reporters or crews out in the field as a layer of protection.

Late Wednesday, the Oakland Police Department said that there have not been any arrests in regard with the incident.

“As you know it has been an extremely violent week. We are asking if you are in the area, have a business, or live nearby to please check your surveillance footage as you may have captured the crime, before, during, or after it occurred,” the police department said in a news release.