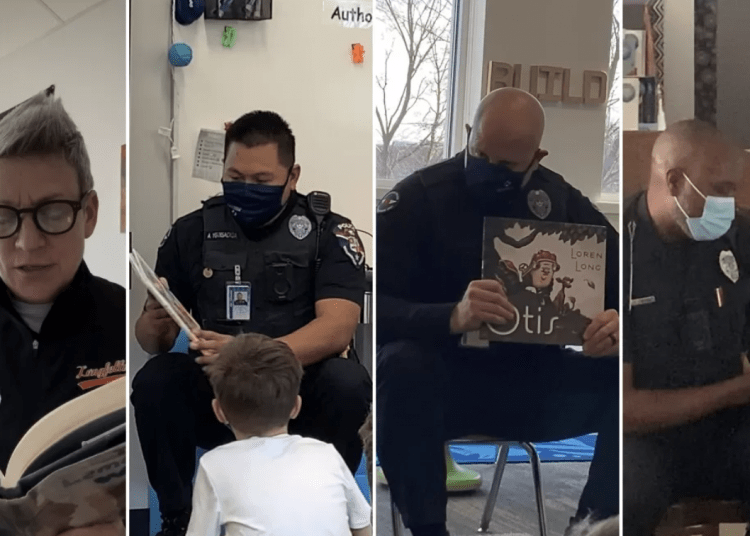 Police haters were out in full force when the Wauwatosa Police Department posted some nice pictures of its diverse officers reading to kids. They were particularly outraged that a Thin Blue Line flag was visible in the background in one of the photos. The Wauwatosa Police wrote, “March was National Reading Month. Big shout out to our Tosa schools for letting us spend a little time reading some of our favorite stories to the class! Follow the link to our Wauwatosa PD YouTube channel and join us for story time at home.”

But they can’t win. Apparently to some, this was cause for “outrage”—despite the significance of the flag as a symbol of honor, religious ceremony, and sacrifice.

What does the thin blue line flag mean? Unfortunately, many sources have copy/pasted Wikipedia or have overlooked the actual use of the flag. According to the San Diego Union-Tribune, to law enforcement, the thin blue line means “police are the force that stands between law and order and chaos, the force that safeguards society against disorder.” Thin Blue Line USA explains, “The black space above the blue line represents society, order and peace, while the black below, crime, anarchy, and chaos. The Thin Blue Line running between them, ‘law enforcement,’ keeps crime from descending into society.”

The flag has caused controversies throughout the U.S. (and in Madison) as some have argued it’s a response to the Black Lives Matter movement. The thin blue line first showed up as a law enforcement reference in the 1950s, however, when Los Angeles Police Chief Bill Parker used the term in a force dealing with corruption controversies. In 1854, a British regiment in the Crimean War was known as the Thin Red Line because of its red uniforms, when it “stood its ground against a Russian cavalry charge,” the Tribune reported.

That didn’t stop some people from expressing fury on the Wauwatosa Police Department’s Facebook page.

Nina Pinter wrote, “Why is there a gang symbol hanging behind her?”

Robert August Crozier wrote, “There’s a hate symbol in this image, hanging on the wall.”

Angela Harris wrote, “Wauwatosa School District, teachers in your district are allowed to hang symbols of hatred and white supremacy in their classrooms? Imagine being a Black child in that teachers classroom, this is not a space that is inclusive of all students. There is no such thing as a blue life, wouldn’t want to miseducate the children would we?”

We reached out to the Wauwatosa police and school district to determine exactly where the flag was hanging, but we haven’t heard back yet. We will update this story when we do.

Rae Banz proclaimed, “That flag has no business in any classroom.”

Jacki Wagner demanded, “Get that flag out of the classroom!🤬”

Laura Peart angrily wrote, “Stop killing people!!! If you’re scared, launch a prayer & get a new job. We don’t receive ‘protection’ from twitchy power-trippers. Blame yourselves if you’re feeling unappreciated & misunderstood lately. BE. THE. CHANGE.” She was presumably referring to fatal police shootings that were ruled justified self defense by the DA.

Catherine Jeter angrily wrote, “That flag is associated with white supremacy and should not be in any classroom. How diverse are Wauwatosa classrooms? How does the Wauwatosa school board see this flag as welcoming all students?”

But another astute reader Brianna Chase noted, “Ok. Since there doesn’t seem to be a ton of logic here. Check it out. Based on the angle, it sure looks like a zoom call. Would mean she’s probably not in the classroom.”

Indeed, that seems pretty obvious from the full video posted to the department’s YouTube page, which shows the officer adjusting what appears to be the computer before she starts to read.

But Rachael Erin insisted, “According to kids who go to the school its the school resource officers office. So while not a classroom, yeah actually IN the school doing harm.”

Other people thought it was nice officers were reading to kids.

“Thank you officers for all you do! Great job Tosa! So nice to see the partnership with the schools and PD!” wrote Jayme Lynn.

Joe Karius wrote, “Love all the SRO’s reading to kids. Love the ‘Blue Line’ flag. Fly the flag of what you believe in. Total support of Police.”

Laura Charlene wrote, “Thank you so much for doing that! You are all the best, and everything you do is so appreciated! ❤”