“I could feel the blood spewing out of my head, I could taste the blood as it was running from my face, I could see it as it was pooling in front of me,” Thadeu Holloway said. 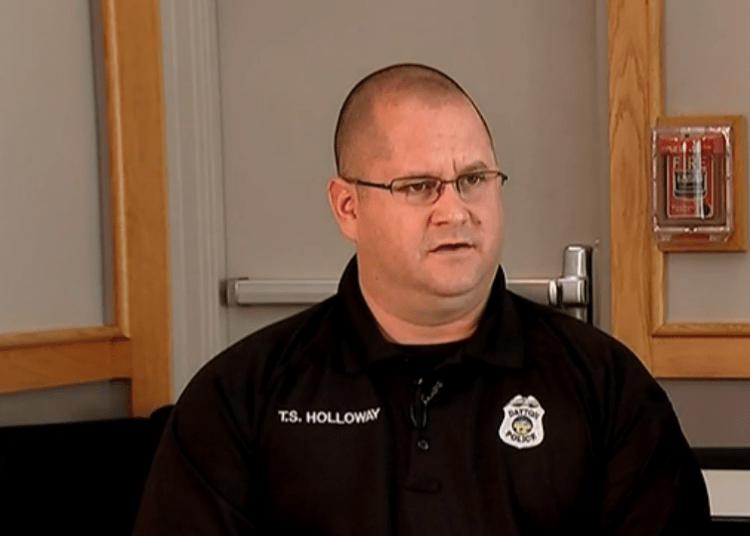 DAYTON, Ohio — On Sept. 21, 2021, Dayton Police Officer Thadeu Holloway was investigating a report of a man trying to use bogus U.S. currency at a store when one bullet changed his life.

Holloway contacted the suspect and sought to gain his cooperation. However, the man remained non-compliant.

“When he turned to face me I knew something was wrong,” Holloway said.

After the suspect threw a punch, Holloway tased the defiant man.

Although the officer ordered the suspect several times to place his hands behind his back, the suspect retrieved a gun and shot Holloway in the head, WHIO reported.

“The officer used his Taser on the suspect, who went to the ground, retrieved a handgun and fired at least one round at the officer, striking the officer on the side of his head. The officer then returned fire, striking the suspect multiple times,” said Matt Carper, who was interim director and chief of the Dayton Police Department at the time of the shooting in September 2021.

2021 NEWS COVERAGE OF THE SHOOTING

“I knew I’d been shot, obviously. I fell to the ground, I never lost consciousness, I knew what happened. I knew what I had to do, so after I had returned fire, I was in my head thinking, ‘I’m going to die,’” Holloway said.

While covered in blood, he sensed there was no time to spare and he needed immediate medical attention.

“I could feel the blood spewing out of my head, I could taste the blood as it was running from my face, I could see it as it was pooling in front of me,” he recalled.

Holloway was loaded into a police unit by a fellow officer and rushed to Miami Valley Hospital, arriving in less than four minutes. The seriously wounded officer said he remembers every moment.

His wife Amanda Holloway was home with their two girls when she received the heart-pounding phone call.

As she rushed to be with her husband, she noticed the street covered with police cars, and she knew that wasn’t a good sign.

Meanwhile, all she could do was wait as medical staff worked on her husband’s injuries, WHIO reported.

“The bullet hit right here on my temple, and traveled underneath the skin and then came out here,” Holloway demonstrated.

Hence, the road to recovery has been long and arduous for him. A year later, he continues to cope with a traumatic brain injury, memory issues and headaches. Moreover, he has trouble finding words, has ringing in his ear and some hearing, as well as vision loss.

Public service in law enforcement has always been a part of the Holloway’s life.

Amanda began as a dispatcher 19 years ago. She currently works in the administrative office at the Huber Heights Police Division.

Holloway, a nine-year Dayton police officer, joined the National Guard in high school and was deployed on three occasions.

Trying to return to work, even in a light duty capacity has been a challenge.

“In January I actually fought with my doctors to at least go back to work, they wanted me stay off work a little longer and I couldn’t stay off,” he said.

Meanwhile, as other police officers in the area suffer trauma, it brings him back to his own hellish encounter.

“Definitely brings back the night of my shooting, makes me feel guilty that I survived and some of them didn’t and it just makes me realize that how dangerous being a police officer is,” Holloway said.

Nevertheless, he continues to concentrate on the well-being of his family.

Antwayne Lowe is the suspect accused of shooting Holloway. He was in critical condition following the shooting, but survived. He remains in Montgomery County Jail, according to WHIO.

In November Lowe pleaded not guilty by reason of insanity. However, in June a judge said he was competent to stand trial.