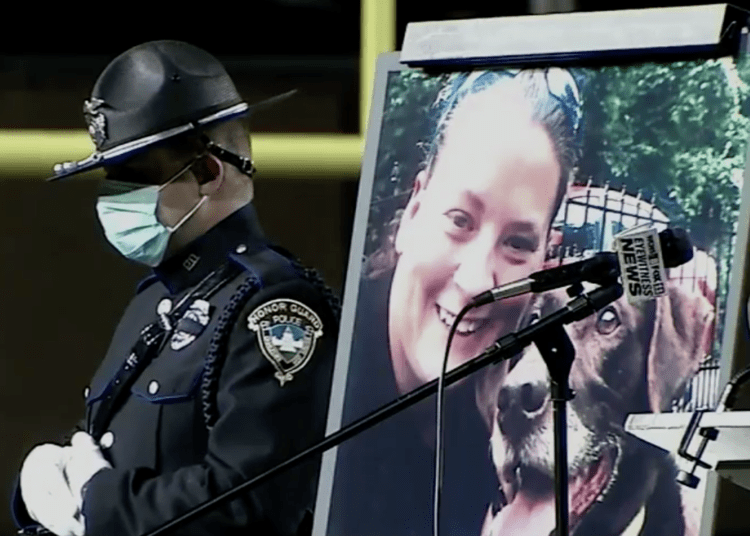 Officer Cassie Johnson was pulled from life support after being shot in the face earlier in the week. (Screenshot Fox News)

CHARLESTON, W.Va. — A police officer in West Virginia who was shot in the face Tuesday while responding to a traffic complaint is not expected to recover and her organs will be donated, officials said.

She was hospitalized in critical condition and underwent surgery until it was determined her body could not long sustain life by itself and she would be taken off life support, Charleston Gazette-Mail reported.

“With a heavy heart, I hate to say she is not going to be able to pull through this,” police Chief Tyke Hunt told reporters outside Charleston Area Medical Center General Hospital, according to the news organization. “She is still fighting but her body is unable to sustain life by itself.”

Hunt commended Johnson “for even in her passing still being a true hero.”

“As one final parting gift to continue to help others, she is an organ donor,” Hunt said. “The doctors are working with the family to determine eligibility and work out some donorship there.”

Investigators believe Johnson also fired at Phillips, who was sent to the hospital with gunshot wounds. An update on his condition was not available Wednesday evening. The incident remains under investigation by the sheriff’s office.

Rutherford declined to provide further information about the incident until witness statements and evidence collection is completed. He said the sheriff’s office will turn over that information to the Charleston Police Department and the Kanawha County Prosecutor’s Office, which will determine possible charges to be filed against Phillips, Fox reported.

“I really can’t get into more detail, I’m sorry,” he said. “We want the full extent of the law to apply in this case. We’re going to do this right and we’re going to do a thorough and conclusive investigation.”

Johnson was the first city police officer sworn in by Mayor Amy Shuler Goodwin after she began her term in January 2019. Goodwin said Wednesday that Johnson “is a wonderful, bright young woman who is going to leave an amazing legacy for every woman in this city.”

“Her family still needs your prayers, and to this community, we still need your strength,” she said.

The CPD Citizen Police Academy Alumni Association set up a GoFundMe page, which had raised nearly $15,000 out of a $20,000 goal as of Thursday morning to benefit Johnson’s family with medical expenses.