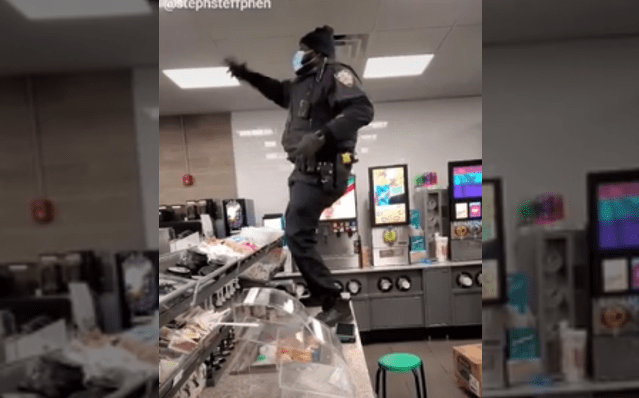 Officer Stephen "Big Steph" Barnes dances on a counter at a local 7-11. (Facebook)

NEW YORK — A Brooklyn police officer busted a move in a very unusual way and now he’s on the move … all the way to Staten Island, according to reports.

An NYPD officer posted a TikTok video of himself dancing in uniform on a convenience store counter. Once the footage was circulated, it got him a transfer known as “highway therapy” as punishment, police sources said Wednesday.

Officer Stephen “Big Steph” Barnes — who works in Downtown Brooklyn’s 84th Precinct — is shown hopping up on a coffee station counter at a 7-Eleven near the stationhouse and expressing himself to hip-hop, according to the footage and police sources, New York Post reported.

The video then cuts to a clip of Barnes dancing on the steps of a building to the curse-filled tune “Beat Box” by the rapper SpotemGottem.

“Ready to get it started, b—h, I got no sense/ Oh, he the plug, riding round with four bricks,” the song blares in the video, as “Big Steph” does his thing.

When police brass discovered the spectacle, Barnes was transferred to the 120th Precinct in the Brighton Heights section of Staten Island, according to police sources.

One police source called the punishment a slap on the wrist akin to “highway therapy,” while others ripped Barnes for disrespecting the NYPD’s honorable blues.

“Men and women died wearing that uniform and I think we’re belittling the position with these videos,” Sergeants Benevolent Association president Ed Mullins said. “I just came from a different place. The uniform meant something and you had a certain amount of pride in that patch. You’re dancing in a uniform that has significant meaning globally.”

The footage was later reposted by the Facebook Loudlabs News NYC with the caption, “This cop dancing in 7-Eleven is hilarious.” It wasn’t immediately clear when the officer posted the original footage on TikTok.

On Wednesday morning, Barnes was being questioned at the 81st Precinct, according to police sources.

Barnes minored in theater and participated in a program that paired NYPD officers with civilians for improvisational theater games, the New Yorker magazine wrote in 2016.

A DCPI source said Wednesday that his assignment hadn’t been changed. “The incident remains under internal review,” a spokeswoman said.

Barnes couldn’t be reached for comment Wednesday. A rep for his police union didn’t immediately return a call from The Post.