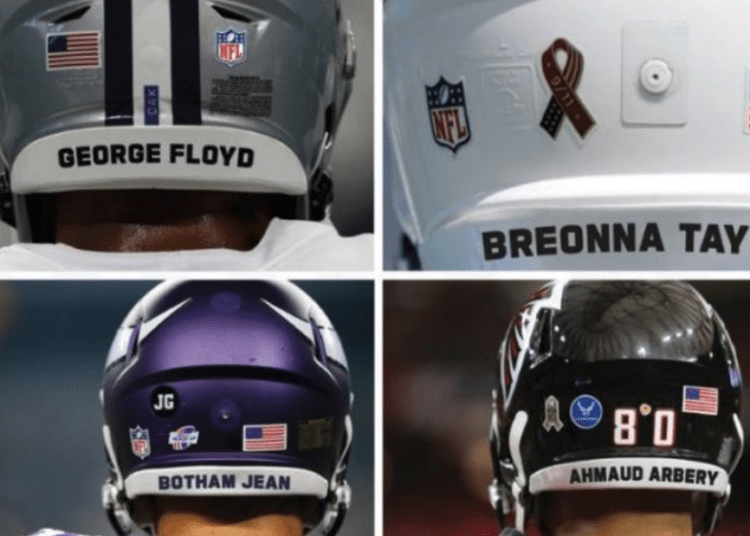 The NFL revealed on Monday its social justice plans for Week 1 of the upcoming season, which includes optional decals players can place on their helmet and messages that could be placed in each end zone.

“As we continue to amplify and elevate the NFL’s ongoing and long-term commitment to social justice, we will be incorporating several prominent elements on the field, into all broadcasts and across league and club platforms to begin the NFL season and beyond,” the memo reportedly read. “In developing these concepts, we have worked directly with players and received input from the NFLPA.”

In the league’s efforts to push forward with its Inspire Change program, helmet decals will be worn to honor “victims of systemic racism and there will be on-field messaging,” according to the NFL.

“In the case of decals, each player will have an option to honor an individual by displaying the person they choose to honor via their name or initials,” the NFL said.

In a few of the examples, the messages “It Takes All Of Us” and “End Racism” would be painted on the end line. Names like Breonna Taylor or Ahmaud Arbery would be on the back of a player’s helmet.

The NFL informed clubs today of plans to amplify its social justice initiatives, including helmet decals and signage in end zones for kickoff games and club home openers. pic.twitter.com/p4lt27tmEY

According to the NFL Network, the league will also go ahead with playing the Black national anthem “Lift Every Voice and Sing” ahead of Week 1 games.

NFL Commissioner Roger Goodell in June vowed that the league would be better in recognizing social justice issues in the U.S. in wake of the death of George Floyd, FOX reported.