About $400K in equipment was taken 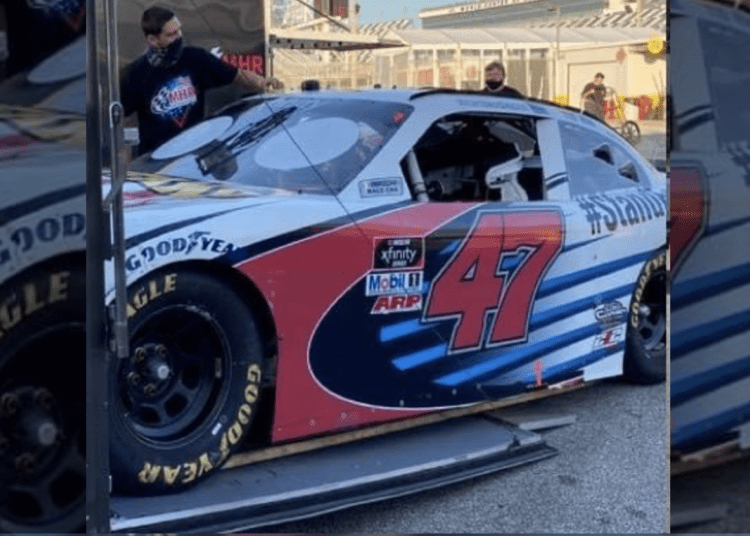 KINGSLAND, Ga. — A Georgia thief made off with quite a hall when stealing a NASCAR team’s truck and trailer with an Xfinity Series race car inside — the “National Anthem” themed car we might add.

With various protests occurring during the playing of the national anthem at sporting events, one has to wonder if the grand theft was by design, or coincidental?

Truck, trailer and various items are set up with with various tracking devices. If you have seen or know the whereabouts of the stolen items, please contact the local authorities. pic.twitter.com/pNi7fLX09v

The Mike Harmon Racing team was making its way back to North Carolina from Daytona, Fla., on Sunday when it made a stop in Kingsland, Ga. and left its trucks in a Cracker Barrel parking lot.

Fox 46 Charlotte reported that surveillance video shows someone getting in the silver 2000 Ford F-350 and fiddling with the ignition before pulling onto I-95 south toward Florida.

“Sunday was awful when we woke up and realized one complete team had completely disappeared,” said Harmon.

The team posted pictures of the missing equipment on social media and is now offering a $5,000 reward.

“There are a lot of people looking for it. If I had it, I would be a nervous guy, I can promise you that,” said Harmon.

The trailer was carrying equipment and the No. 47 Chevrolet Camaro of Kyle Weatherman, who finished 17th in the Daytona Road Course race. A second truck and trailer hauling the team’s other car was left behind and Harmon doesn’t think the thief knew what was in the trailer.

Nevertheless, suspicious minds aren’t so sure.

The No. 47 car was displaying a distinctive “We Stand for the National Anthem” livery at the time of the theft. A police report put the value of the items stolen at $400,000, according to NBC Sports.

“We have other cars, but they aren’t 100 percent. Most teams are that way. You put your best stuff on the car you are running,” Harmon said.