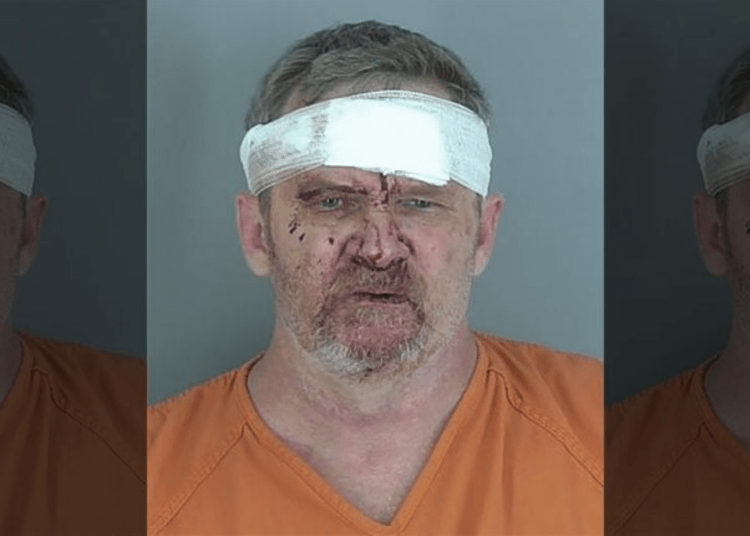 Douglas Lane was tackled by a group of fathers in the restaurant's parking lot, police said. (Spartanburg County Sheriff's Office)

DUNCAN, S.C. — A group of fathers helped police arrest a registered sex offender accused of peeping at a 15-year-old girl in the restroom of a Cracker Barrel in South Carolina, according to reports.

Douglas Lane, 53, is facing charges of voyeurism and narcotic violations stemming from a reported incident in Duncan on Sunday morning, according to Fox5 Atlanta.

Duncan Police Chief Carl Long told WSPA that a 15-year-old girl in town for a softball tournament was in the bathroom of a Cracker Barrel when she noticed something was moving near her feet. When she looked down, Long said she saw a man’s head from the stall next to her.

The girl told her father what happened and an employee coaxed Lane out of the bathroom, the station adds.

Long told WSPA that the girl’s father confronted Lane and a witness said he went “running, sprinting out the front door” of the restaurant “with a very bloody nose.”

Long said Lane tried to flee, but was tackled and restrained by a group of fathers until police arrived, WSPA reported.

Lane’s phone reportedly was seized by police after it was found on the bathroom floor. One witness told WSPA that the 15-year-old wasn’t the only girl in the restroom at time.

“I’ll never forget the way they looked after,” that witness said. “They were traumatized.”

According to government records, Lane has been a registered sex offender in North Carolina since 2004, when he was convicted of secretly peeking into an occupied room in Mecklenburg County. In that case, the record shows his victims were 8 and 9 years old.

Four years later in the same county, Lane was convicted of secretly peeking into an occupied room with his victim being 18 or older.

South Carolina’s sex offender registry finds that Lane was convicted of peeping, voyeurism or aggravated voyeurism in 1997 and failure to register in 1999.

Lane is reportedly being held on a meager $2,000 bond for the new charges.