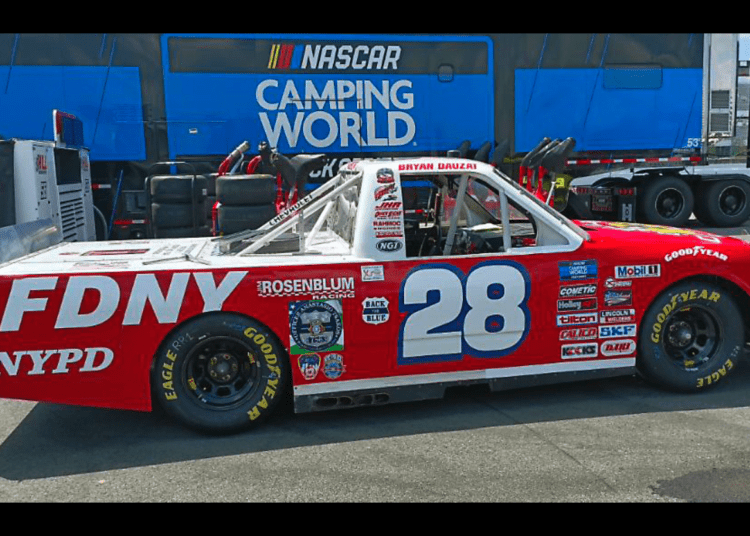 NASCAR has apparently gone woke and the organization is trying to ensure the public doesn’t find out about it, according to MetroSports Magazine.

During a technical inspection for the CRC Brakleen 150 on July 22 at Pennsylvania’s Pocono Raceway — the 16th of 23 races in the 2022 NASCAR Camping World Truck Series — a NASCAR official objected to a decal on the #28 Truck.

The official said the 5 inch by 5 inch decal reading, “Back the Blue” would have to be removed in order to pass inspection, MetroSports reported.

The offending decal, among others that adorn the #28 FDNY Racing truck. (Photos courtesy of Jim Rosenblum and FDNY Racing via MetroSports Magazine)

According to MetroSports, the demand to remove the decal is a shift from past practice when the organization permitted its teams, owners and drivers to freely show their allegiances in a demonstration of American liberty.

Notice the “Back the Blue” decal is next to one honoring fallen Officer Anastasio Tsakos.

The Officer Down Memorial Page reported the following details regarding Tsakos’ line of duty death:

Detective First Grade Anastasios Tsakos was struck and killed by a vehicle being operated by an intoxicated driver.

Detective Tsakos responded to assist at the scene of a fatal automobile collision on the Long Island Expressway, near the entrance to the Clearview Expressway. He was redirecting traffic when a 2013 Volkswagen driven by a 32-year-old woman swerved to avoid other cars and hit Officer Tsakos as he stood next to his marked patrol vehicle.

Detective Tsakos was taken to New York-Presbyterian Hospital where he succumbed to his injuries.

The driver fled the scene in her vehicle but was later apprehended. An investigation revealed that the driver was intoxicated and driving with a suspended driver’s license. She faces charges including vehicular manslaughter, reckless endangerment, leaving the scene of a deadly accident, and driving while intoxicated.

Detective Tsakos served with the New York City Police Department for 13 years and was assigned to Highway Unit 3. He is survived by his wife, 6-year-old daughter, and 3-year-old son.

Detective Tsakos was posthumously promoted to the rank of Detective.

The woman accused of killing Tsakos was identified as Jessica Beauvais. Hours before the fatal crash she posted a podcast on Facebook — later deleted — that included anti-police rants, Law Officer reported.

As she was escorted out of the 107th Precinct stationhouse in Queens for her arraignment for the April 2021 death of Tsakos, she said, “I’m sorry that I hit him and now he’s dead.”

Read more from MetroSports Magazine regarding the NASCAR controversy.