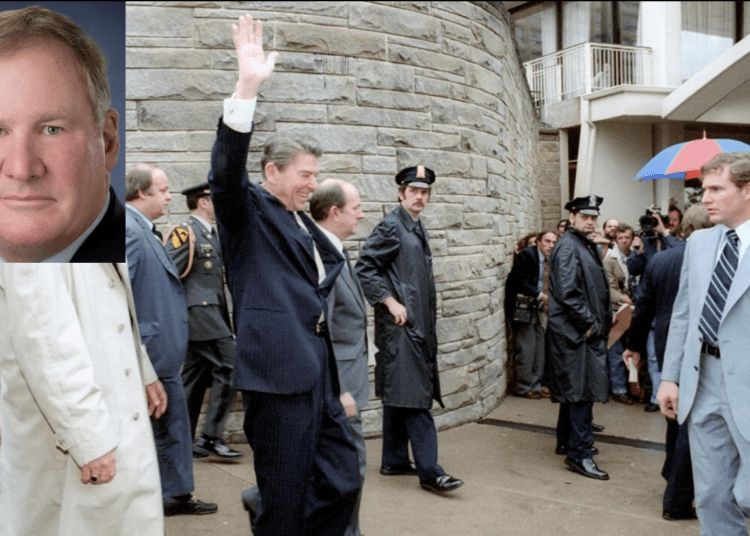 ORLAND PARK, Ill. — The Orland Park, Ill. chief of police is ready to retire 39 years after he stopped an assassin’s bullet intended for then President Ronald Reagan with his chest.

Tim McCarthy was part of the president’s Secret Service detail at the Washington Hilton Hotel when Reagan was shot by a gunman’s assassination attempt on March 30, 1981.

After retiring from the Secret Service, McCarthy became the police chief in Orland Park.

He announced his retirement last week, saying that after 26 years in the Chicago suburb, he wanted to spend more time with his wife, children and grandchildren.

After a total of 48 years on the job, his retirement date is Aug. 1.

“It has been a great career,” the 71-year-old McCarthy told WLS-TV on Wednesday. “I would do it for another 10 years but family, at some point, comes first.”

Ronald Reagan waves just moments before he was shot on March 30, 1981. Secret Service Agent Tim McCarthy is on the right in the photo, wearing a business suit and striped tie. (White House Photographic Collection)

Would-be assassin John Hinckley Jr. fired off seven rounds in the attempt on Reagan’s life. McCarthy was struck in the chest by the fourth round as it traversed his right lung, diaphragm, and right lobe of the liver, according to reports.

The president was shot in the left lung, and the .22 caliber bullet just missed his heart. In an impressive feat for a 70-year-old man with a collapsed lung, he walked into George Washington University Hospital under his own power.

However, things quickly changed. “I feel I can’t catch my breath,” Reagan told the nurses rushing toward him. His teeth were stained with blood and he was gasping for air, the Los Angeles Times reported.

“He groaned, his knees buckled, and he began to fall. . . . He dropped to one knee. He then collapsed and was carried to the trauma room,” according to the doctors’ report.

As he was treated and prepared for surgery, he was in good spirits and quipped to his wife, Nancy, ”Honey, I forgot to duck,” and to his surgeons, “Please tell me you’re Republicans.” Reagan’s surgery lasted two hours, and he was listed in stable and good condition afterward, according to history.com.

Also injured in the shooting was Reagan’s press secretary, James Brady, who was gravely injured after being shot in the head, and Washington police officer Thomas Delahanty, who was shot in the neck.

Hinckley spent decades after the shooting confined to a psychiatric hospital before being released in 2016.

“I turned toward where I thought the shots were coming from, attempted to make myself as big as I could and lo and behold, I was hit right in the chest,” he said.

He said he had a great relationship with Reagan and his wife Nancy after the president left office.

“But you have to remember that it is business too, and you have to separate those things,” he told the station.

“That was my job to protect him, President [Jimmy] Carter, whoever it was,” he said. “Glad I could do it at the time. Glad the training paid off.”

McCarthy is retiring at a time when police officers are being harshly criticized by antagonists. But he said he hopes it doesn’t discourage people from pursuing a career in law enforcement, FOX News reported.

“Most of our departments are extremely professional, but we do make mistakes. But we got to minimize those. What happened in Minneapolis shouldn’t have happened,” he said, referring to the May 25 death of George Floyd while in police custody.

The son of a Chicago police sergeant, McCarthy is equally proud of his time as police chief of his community.

“Our crime is lower right now in index crime in 2020 than it was in 1994, when we were a much smaller community,” McCarthy said.

Deputy Chief Joseph Mitchell will be appointed interim chief when McCarthy retires at the beginning of next. month.

El Paso ‘hero,’ not so much … Secret Service arrests man prior to White House medal ceremony