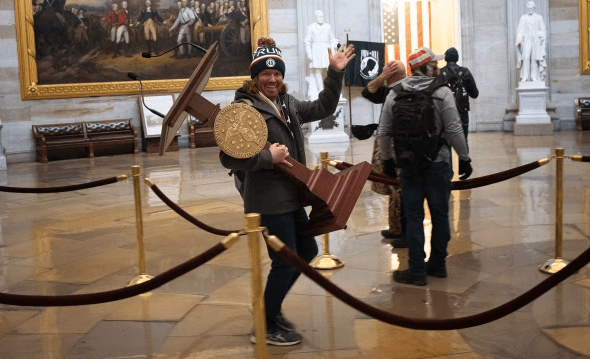 Adam Johnson, a pro-Trump protester, carries the lectern of Speaker of the House Nancy Pelosi through the Rotunda of the US Capitol building. (Win McNamee/Getty Images)

UPDATE: Adam Christian Johnson, 36, was picked up by Pinellas County Sheriff’s Office deputies Friday night on a federal warrant, according to an agency report. On Monday, WFLA shared video obtained from authorities of Johnson being processed into the Pinellas County Jail over the weekend.

Adam Johnson, the Parrish man who was allegedly seen carrying a lectern during the Capitol riot, was booked into the Pinellas County Jail over the weekend. Authorities released video on Monday. https://t.co/a5Jaxh6iYT pic.twitter.com/osvSq6O1SD

Police records on Monday also showed that Johnson has been released from custody — but the terms of his release were not immediately clear, Fox reported.

WASHINGTON — The man with a beaming smile depicted in a viral photo carrying House Speaker Nancy Pelosi’s lectern during the storming of the US Capitol is a father of five from Florida with a history of naroctic arrests, according to records and reports.

The man who is described by media accounts as a diehard Trump supporter, whose image has been turned into a variety of memes about the attempted insurrection, has been identified as Adam Johnson, 36, of Parrish — a small unincorporated area about 40 miles south of Tampa, the Bradenton Herald reported.

An acquaintance of the man confirmed his identity to the news organization, it reported.

Johnson was captured in a blue Trump hat and an American flag scarf smiling and waving at Getty Images photographer Win McNamee — who snapped the pic — as he carried the lectern bearing the official seal of the speaker of the House, New York Post reported.

Behind him, rioters were ransacking the Capitol after overwhelming police and breaking windows to breach the famed dome during a joint session of Congress to certify Electoral College votes for President-elect Joe Biden.

Soon after Johnson’s photo went viral, local residents were quick to identify him. They told the Herald that Johnson is a father with five children who lives in the Gulf Coast town with his wife, who is a licensed family medical doctor, records show.

Johnson has a long list of run-ins with the law, according to public records, including numerous marijuana arrests and one felony possession of cocaine arrest from 2005.

The Post reported that Johnson was unable to be reached for comment — phone numbers listed in his and his wife’s name were disconnected.