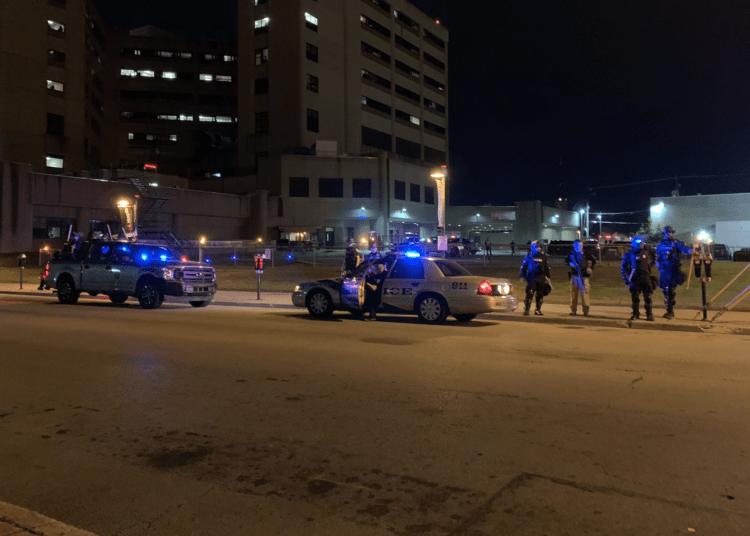 Two police officers were shot in Louisville on Wednesday night as protesters flocked to the streets to rally against the death of Breonna Taylor, authorities said.

Shortly after a police news conference, reports emerged on social media that a third police officer may have been injured.

The two police victims confirmed by authorities were being treated at a hospital for non-life-threatening injuries, Interim Louisville Metro Police Department Chief Robert Schroeder said in a short news conference around 10 p.m. ET.

“One is alert and stable, the other officer is currently undergoing surgery and stable,” Schroeder said, adding that one suspect was in custody. The suspect was not identified and potential charges were not available.

One officer was shot in the abdomen, below a bulletproof vest, while the other was shot in a thigh, sources told the Courier-Journal of Louisville.

Schroeder said the shootings happened at the intersection of First and Broadway. It was unclear whether the protests played a role in the shootings, FOX reported.

A third officer reportedly suffered minor injuries but wasn’t shot, a reporter with WGCL-TV in Atlanta reported. The station reported that two civilians also were shot.

Demonstrators turned out in droves hours after a grand jury handed down charges against one of three officers involved in the March raid inside Taylor’s apartment — with none of the charges directly involving Taylor’s death.

The local branch of the FBI said on Twitter that its SWAT team responded to an officer shooting and was assisting in the investigation.

The FBI Louisville SWAT team has responded to an LMPD officer being shot and will continue to assist in the investigation.

LOUISVILLE, Ky. — A Louisville Metro Police Officer has been shot in downtown Louisville amid protests in response to the Breonna Taylor decision.

Metrosafe confirmed to WDRB News that an officer had been shot at Brook and Broadway sometime before 8:30 p.m. Wednesday. The news was also confirmed by LMPD Spokesperson Lamont Washington in an emailed statement.

OFFICER SHOT: Per MetroSafe, one LMPD Officer has been shot at Brook & Broadway. This is a look outside U of L hospital right now, the ER entrance off Chestnut & Hancock. @WDRBNews #Louisville pic.twitter.com/LFCMr5624O

No other information was immediately available. Possible injuries to the officer are unknown at this time.

UPDATE: Fox News’ Sean Hannity reported on live TV that LMPD has now confirmed that two officers have been shot. No further details were currently available.

BREAKING VIDEO – Second round of shots ring in Louisville pic.twitter.com/ID4GLy4ZsZ