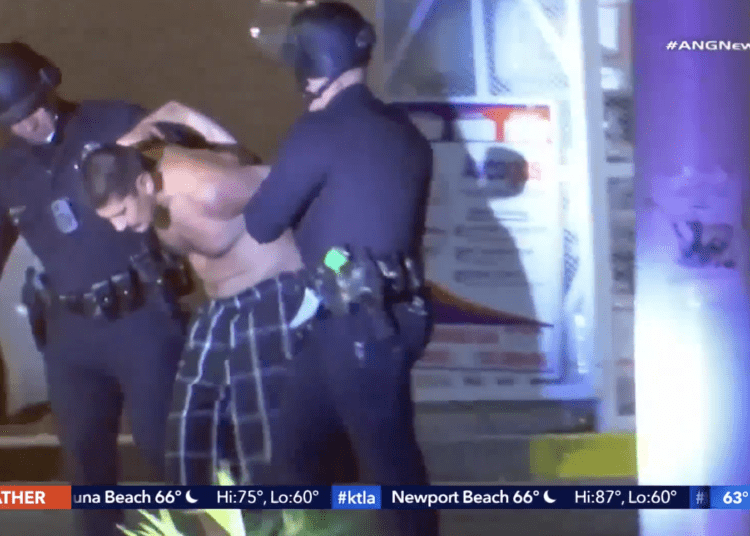 LOS ANGELES — A frenzied gunman is accused of shooting an officer of the Los Angeles Police Department inside a Granada Hills grocery store Sunday, authorities said.

The gunman, who police have not identified, was arrested not long after the shooting, police said.

According to police, officers responded to a report of a man causing a disturbance inside a Ralph’s grocery store near Balboa Boulevard and Devonshire Street around 6:30 p.m. They learned the suspect was armed with a gun as they headed to the scene, police said.

“He definitely smelled like alcohol, and then he pulled a gun on anyone who would talk to him,” said a Ralph’s employee named Brad. “So my manager came out, called police,” KTLA reported.

Police said the suspect assaulted several people inside the grocery store. Video obtained by the news organization shows him not wearing a shirt as he stands on top of a store shelf and dances.

The Ralph’s employee, who did not give his last name, said the man also fell through the roof.

“That’s when the cops came and shot him with a bean bag, and then he pulled his gun, shot a cop,” Brad said, explaining he was outside the store and heard the gunshots. The store was evacuated.

Police said the man fled the store after shooting one of the officers.

The suspect went inside another nearby business and officers took him into custody shortly after, police said. Video shows him raising his arms and surrendering to officers outside an AM/PM convenience store.

He was not shot but he was taken to a local hospital for a medical evaluation, KTLA reported.

A firearm was recovered at the scene, police said.

The officer was taken to Northridge Hospital Medical Center for a gunshot wound. Fortunately, it is not believed to be too serious, according to LAPD. Just after 10:30 p.m., four hours after officers first responded, Chief Michel Moore tweeted the officer was released from medical care with sutures on his hand.

In a tweet, the department said the officer is expected to “make a full recovery.”