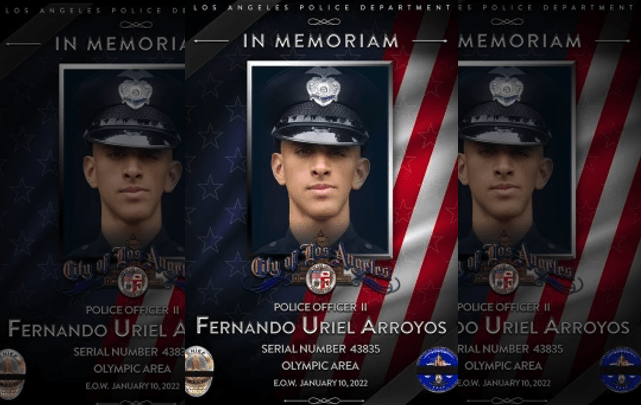 Fernando Arroyos was gunned down during an armed robbery Monday evening. (LAPD)

UPDATE: Four people have been arrested in connection with the shooting death of an off-duty Los Angeles police officer earlier this week, officials said.

Los Angeles County Sheriff’s Department officials however, did not release any further information about what the people were arrested on suspicion of, and they have not been identified, KTLA reported.

LOS ANGELES – An officer of the Los Angeles Police Department was shot and killed during an armed robbery Monday night. He was identified as 27-year-old Fernando Arroyos.

Arroyos is survived by his mother and stepfather. He was an only child, LAPD Chief Michel Moore said.

“He was shopping just outside the city of Los Angeles in unincorporated L.A. County for his first home with his girlfriend … gunfire ensued and he was shot and pronounced dead before he could be transported to the hospital,” Los Angeles Mayor Eric Garcetti said, according to KTLA.

Authorities said they had multiple people of interest in custody and are investigating whether a man who went to the hospital with gunshot wounds Monday evening is connected to the homicide.

“He had a promising future, a bright future that was taken away viciously over a street robbery,” Moore said. 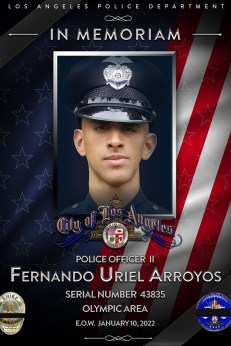 “Last night I responded to a Los Angeles Hospital where my Deputies helped transport an off duty Police Officer who had been shot to the hospital,” his tweet read. “There is nothing more tragic and dreadful than to receive this phone call … Rest assure, our Department’s investigators are working hard to hold those responsible for this cowardly act.”

Officer Arroyos and his girlfriend were crossing a street in a South LA neighborhood at around 9:15 p.m. on Monday when a truck with three men approached and attempted to rob the couple, Chief Moore said, according to the New York Post.

The three men “got out of the vehicle and confronted our officer, and it appears that the target was an attempted robbery,” Moore said. “One of the suspects, based on the information we have at this preliminary juncture, produced a handgun. The officer yelled for his girlfriend to leave, to run … go back to the car.”

Responding deputies arrived at the scene and found the off-duty officer lying in an alleyway with at least one gunshot wound on his body.

Deputies did a “load and go” and rushed Arroyos to St. Francis Medical Center in Lynwood where he later died from his injuries.

The suspects fled in a black pickup truck.

Sheriff’s officials said three men and two women were detained in connection with the shooting. Their names were not released and none had been charged as of Tuesday afternoon.

LOS ANGELES – An off-duty officer of the Los Angeles Police Department was shot and killed during what is being called an attempted robbery in the unincorporated Florence-Firestone neighborhood of South Los Angeles late Monday night, according to a report.

The fatal shooting occurred about 9:15 p.m. near the intersection of Beach Street and East 87th Street after a black pickup truck approached the off-duty officer, KTLA reported.

Several individuals exited the suspect vehicle and a confrontation occurred, which led to an officer-involved shooting, according to a news release from the Los Angeles County Sheriff’s Department.

“Our officer exchanged gunfire with at least one of these suspects. We do have our officer’s gun and we have an additional weapon that we believe was responsible for this assault,” LAPD Chief Michel Moore said during a news conference.

Following the deadly shooting, the male suspects returned to their truck and fled the scene.

Los Angeles Sheriff’s deputies responded to the location and transported the officer in their patrol unit to a local hospital. However, the wounds proved fatal, according to LASD’s news release.

The deceased officer’s identity has not been released at the time of publication.

“We pray for the officer’s family, and their fellow officers, during this time of pain and sorrow,” part of the statement posted on Twitter read.

Tonight, we mourn the loss of one of our officers who was shot & killed in an armed robbery attempt. The officer was off-duty. We pray for the officer’s family, and their fellow officers, during this time of pain and sorrow. This is an active investigation. More info to follow. pic.twitter.com/6xpiAXjr5W

No further details were immediately provided regarding the suspects or the ongoing investigation.

Cleveland Police Officer Shane Bartek, 25, was murdered by carjacking suspects earlier this month. The off-duty officer fought back during the attack, but was shot twice and later died at an area hospital. Two suspects have been arrested and charged in the case, Law Officer reported.