'We both lost our sons,' says a retired police officer-mother whose son was killed in the line-of-duty 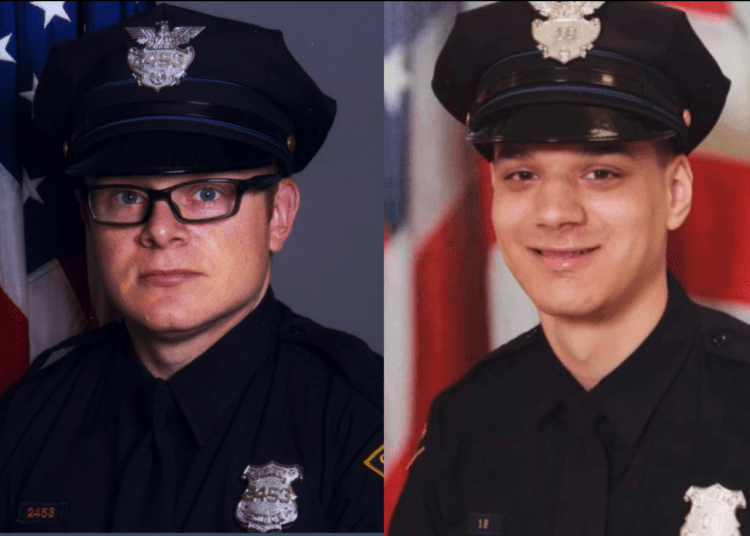 CLEVELAND – A retired Cleveland police officer says she was stressed on Friday when hearing the news that an officer was killed after previously experiencing the line-of-duty death of her son in 2017. Then her worst fear came true when she discovered the deceased officer was her cousin’s son, reported FOX 8 in Cleveland.

Jacqueline Ketterer comes from a family of cops, and she also retired from the Cleveland Division of Police. Her son, Cleveland Police Officer David Fahey Jr. was killed in 2017 by a hit and run driver when he was assisting at the scene of a traffic fatality on I-90, according to ODMP.

Fahey was a U.S. Navy veteran and had been with the department for 2 ½ years when he was killed. The five-year anniversary of his death will be Jan. 24.

Cleveland Police Officer Shane Bartek, 25, was murdered by carjacking suspects on Friday. He is the son of Ketterer’s cousin.

The off-duty officer fought back against the armed robbery suspects during the attack on Rocky Drive near Fairway Avenue. However, he was shot twice during the crime and rushed to Fairview Hospital, where he died, Law Officer reported.

Responding officers soon located the officer’s stolen vehicle and a pursuit took place. The chase ended ended in a solo vehicle crash on East 260th Street and Lakeshore Boulevard in the city of Euclid about 7 p.m., according to sources. Police arrested Anthony Butler Jr. at the scene, but later arrested Tamara McLoyd on the charge of aggravated murder, according to FOX 8.

“I thought we have to get family together, gather the troops and hold on and take this terrible journey that we’re about to take on again,” said Ketterer.

She says again because this feeling is all too familiar after losing her son in 2017.

“It’s tragic and it’s so hard,” she said. “We both lost our sons where there was a suspect on the loose so besides the fact that we’re worried about our child, we’re also worried about the public’s safety.”

Cleveland police say Bartek fought his attackers, but was shot twice in the process. Ketterer says she believes he was reacting in a way he was trained to react.

“We tell people if you’re a victim nothing is worth your life,” she said. “Give them your keys, your wallet, your car. But I think the police in you kicks in and you’re like, ‘I’m going to handle this situation as a policeman and not a victim.’”

Ketterer says that Bartek’s mother, Debra, is struggling, but she’s holding up. She says she’s trying to help her through it by offering counsel given her past experience.

“I tell her to take each day and know that she has support,” said Ketterer. “Don’t worry about the little things or the big things. Take it a day and a time and it’s going to hurt forever.”

“Our family would like to express our sincere gratitude for the overwhelming show of love and support. Shane lived his life to the fullest. He didn’t take life too seriously but always made sure everyone around him was taken care of and happy. He was goofy, always had a smile on his face, and always brought people out of their shells with his confidence and calm demeanor. Shane was a son, a brother, a twin, and friend. But so much more. He lived his life in kindness and to help others. He will be missed forever.”

Regardless of the bitter circumstances, Ketterer says their family will not stop from bleeding blue. Her eight-year-old grandson even says he wants to be a police officer when he grows up.

“They were good boys and all they wanted to do was do the right thing,” said Ketterer. “They wanted to see that society takes one step in the right direction. I’m five years into this and it doesn’t make it any easier but we appreciate the brothers and sisters in blue still fighting the fight to keep our hero alive in our hearts.”

Bartek had worked with the Cleveland Division of Police since August 2019. He was assigned to the Fifth District on the city’s northeast side.