L.A. County Sheriff Says Deputies Will Be Allowed to Conceal Their Names During Protests 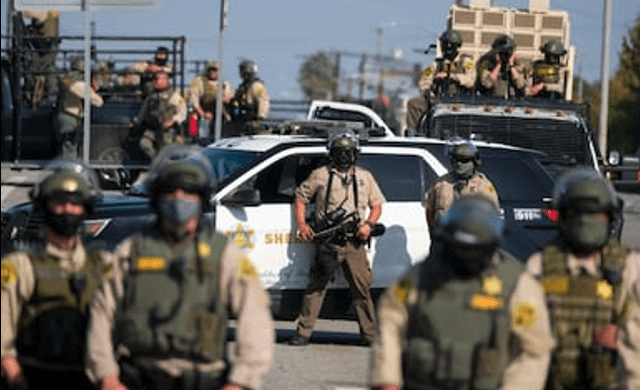 LOS ANGELES — Los Angeles County Sheriff Alex Villanueva has authorized his deputies to conceal their names while policing protests and other civil disturbances.

Villanueva said Wednesday that the change to the department’s longstanding practice of requiring deputies to wear tags engraved with their last names on their uniform shirts was in response to recent incidents in which deputies were harassed and had personal information revealed by protesters, Los Angeles Times reported.

The details of the new rule are still being worked out, but will leave it to deputies to choose whether to cover their name tag, a department spokesman said. Those who choose to do so will be identifiable through their badge numbers, the spokesman said.

The change came after a protest last week outside Men’s Central Jail at which several deputies were filmed with duct tape covering their name tags. The move troubled activists and department watchdogs, who said such obfuscation made it much harder to hold deputies accountable and fueled distrust among communities demanding greater transparency and reforms by police agencies. Some said replacing deputies names with a number will make it harder to identify deputies who they accuse of abusive conduct during chaotic situations at protests.

State law requires police officers to clearly display either their name or an identification number on their uniforms.

During a live Facebook broadcast Wednesday, Villanueva explained his reasoning, saying protesters have used deputies’ name tags to find their home addresses and spread the information on social media. At times, he said, people have shown up at deputies’ homes and vandalized their property.

“That is not exactly the intent of state law,” Villanueva said.

Villanueva pledged to pursue prosecution of those involved, according to the Times.

He said his own name and address were plastered on banners hung from overpasses on several freeways and on fliers stuck to telephone poles that resembled fugitive wanted posters.

LASD said there have been “numerous” occasions that deputies have been harassed and threatened at home.

“In several of these instances there were vile and repulsive comments made, as well as implied threats of violence,” Lt. John Satterfield said.

A law enforcement source, who was not authorized to speak on the issue, told The Times that demonstrators flashed photos of the deputies’ relatives and threatened to rape their wives and shoot their family members.

In California, it’s a misdemeanor to post identifying information about someone in order to put them in reasonable fear for their safety and cause them unwanted physical contact or harassment.

Demonstrators over the summer showed up at the home of Deputy Miguel Vega, who was involved in the fatal shooting of Andres Guardado, 18, in an incident that generated weeks of protests and calls for an independent investigation. Authorities moved Vega’s family from the home as protesters were “yelling at the residents and posting ‘killer cop lives here,’” according to a brief entry about the incident in a Sheriff’s Department log obtained by The Times. A flier was circulated with Vega’s name and address next to a photo, saying he shot Guardado five times in the back. However, they omitted details.

Sheriff’s officials said they recovered a handgun near Guardado’s body, and say he was reaching for the weapon when he was shot, Law Officer reported. Guardado’s family said he was armed because he was working as a security guard for the auto body shop. Deputies said he was not wearing a guard’s uniform when they responded to a report of a non-fatal shooting in the area and wasn’t licensed as a guard or old enough to hold that job under state law.

Other police agencies have also changed how officers identify themselves in the field.

The Beverly Hills Police Department is allowing officers to cover their name tags while assigned to protests, according to the Times. And the Portland Police Bureau in Oregon recently assigned each of its officers a three-digit identification number to wear on their helmets during protests in part due to demonstrators repeatedly staging events at the homes of police officials.