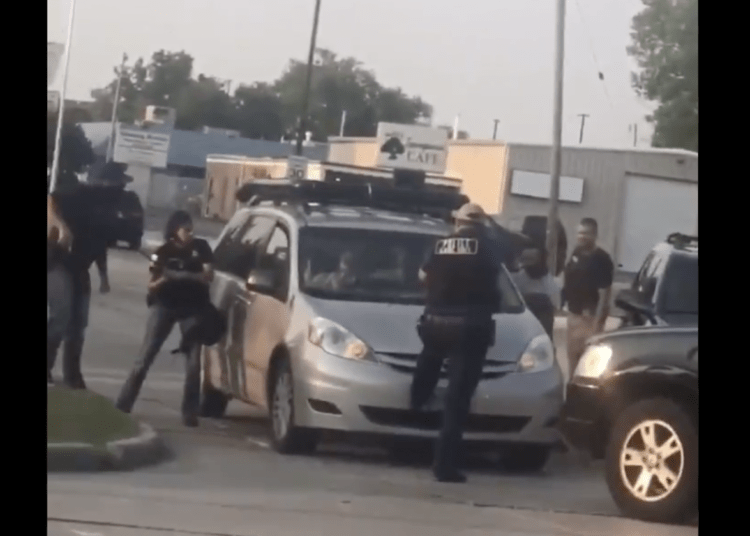 However, a group out of Seattle that was allegedly founded to provide free food to protesters and activists, RiotKitchen206, claims it was their members who were arrested and that they were in Kenosha only to serve meals to people at the demonstrations, WMTV reported.

According to a statement posted on Kenosha Police Department’s Facebook page, the tipster told them the vehicles were in a remote lot near State Highway 50 and Green Bay Road. Officers soon found the vehicles – a black school bus, a bread truck, and a tan minivan. With the assistance of U.S. Marshals, a surveillance was conducted.

“Police followed the vehicles to a gas station near Washington Road and 30th Avenue. Police observed the occupants of the black bus and bread truck exit and attempt to fill multiple fuel cans.

“Suspecting that the occupants of these vehicles were preparing for criminal activity related to the civil unrest, officers attempted to make contact and investigate. The officers exited their vehicles, identified themselves, were wearing appropriate identification, and then detained the occupants of the bus and bread truck.

“The minivan attempted to drive away; however, Kenosha Police stopped this vehicle and ultimately forced entry to the minivan and arrested the occupants.

During the early evening hours of August 26, 2020 Kenosha Police Department received a…

In a tweet apparently posted not long after the arrest, Riot Kitchen shared what appeared to be video of the capture of the minivan, which appeared in the video to have Oregon license plates, and the arrest of those individuals.

“This is our crew and we know why they were there. To feed people. That’s it,” the organization said in tweet replying to someone asking about the video.

The organization, which was founded during the protests of George Floyd, last tweeted Wednesday that it was still trying to locate some members of its team. It has not tweeted any updates since then, WMTV reported.

Riot Kitchen HQ just learned that our bus crew was arrested in broad daylight in #Kenosha today – kidnapped by feds in unmarked vans.

We are currently trying to find our friends who were just there to feed people.

Please share and donate for bail via Venmo riotkitchen206 pic.twitter.com/o2TDbohvFl