Kenosha car dealership goes up in flames during riots 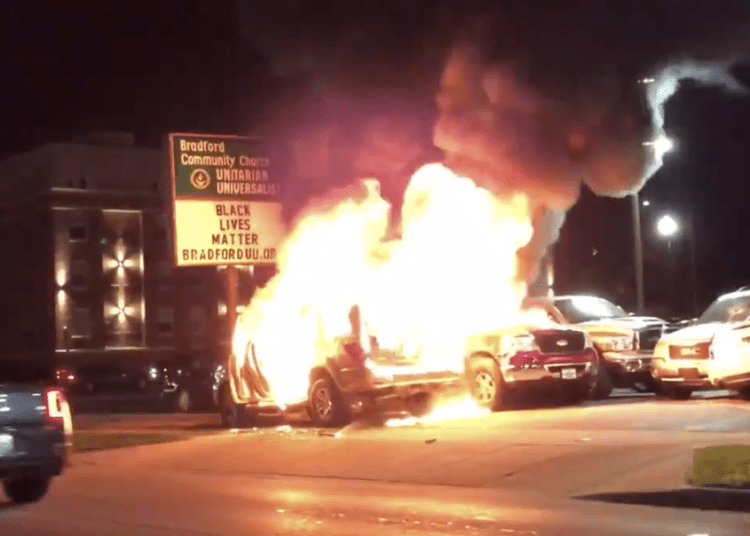 Editor’s correction: When this article was prepared, the BLM promotion appeared to be on a sign belonging to the car dealership. Upon further inspection, we determined the sign belongs to a neighboring church.

KENOSHA, Wis. — A car dealership in Kenosha was targeted by rioters during a crime spree overnight in the wake of the OIS of a Black man that was caught on video and circulated on social media. Ironically, the dealership displayed a sign in support of Black Lives Matter. Apparently, the rioters didn’t care.

The parking lot that typically stores a local business’s selection of used cars was instead filled with rows of the vehicles’ charred remains hours after rioters took to the streets in and around the city’s downtown area, according to several images shared on social media, Fox News reported.

A look at the car lot we saw on fire around 3 this morning. (About a block from the Kenosha courthouse). @fox6now pic.twitter.com/NI0bJOvIn5

Kenosha was an auto manufacturing center for more than 100 years before transforming into a bedroom community given its location almost directly in between Milwaukee and Chicago.

This used car dealership was set on fire overnight by protestors. Car Source is just down the street from the Kenosha courthouse. The owners are devastated. Their business a total loss. @cbschicago pic.twitter.com/emYtWNzvh9

Prior to the overnight destruction, Car Source had more than 140 vehicles available for sale, according to its website.

A spokesperson for Car Source did not immediately respond to a Fox News request seeking comment, but CBS Chicago reporter Vi Nguyen described how the owners “are devastated.”

Nicholas Smith felt so helpless watching the dealership go up in flames. He said he supports people protesting peacefully. He does not condone the violence. @cbschicago pic.twitter.com/XI5hhDX3PP

Hours earlier, Drew Hernandez, a reporter who uses the Twitter handle @livesmattershow, shared videos showing a progression of demonstrators’ destruction of Car Source as well as other businesses and property in the city.

First, around 2:20 a.m., Hernandez posted footage of what appeared to be a flaming flare positioned under a seat in the back of an open vehicle.

Rioters are setting dealership cars on fire in Wisconsin with flares pic.twitter.com/PwQKLjNU2E

Just 10 minutes later, the truck appeared to have gone up in flames, with the fire extending to neighboring vehicles, the subsequent footage shows.

A different video appears to show multiple fires set throughout the car lot as car horns and loud bangs can be heard blaring in the background.

BLM rioters have set a car dealership lot on fire in Wisconsin pic.twitter.com/7fM5zJDpYO

The fire continues to spread farther throughout the parking lot as smoke billows from the area and at least one small explosion can be seen, another one of Hernandez’s video shows.

The city’s downtown area was closed Monday “due to damage sustained during last night’s civil unrest,” according to a post on Kenosha County Government’s Facebook.

Democratic Gov. Tony Evers condemned the shooting of 29-year-old Blake, who was hospitalized in serious condition. The three officers at the scene were placed on administrative leave, standard practice in a shooting by police, while the state Justice Department investigates.

The shooting was captured from across the street on cellphone video that was posted online.

In the footage, Blake walks from the sidewalk around the front of his SUV to his driver-side door as officers follow him with their weapons drawn as they appear to be giving him orders. However, a non-compliant Blake opens the door and leans into the SUV. As a result, an officer grabs his shirt from behind and then apparently opened fire.

Seven shots can be heard, though it isn’t clear how many struck Blake or how many of the officers fired. During the shooting, a Black woman can be seen screaming in the street and jumping up and down.

“While we do not have all of the details yet,” the governor said in a statement, “what we know for certain is that he is not the first Black man or person to have been shot or injured or mercilessly killed at the hands of individuals in law enforcement in our state or our country.”

Tonight, Jacob Blake was shot in the back multiple times, in broad daylight, in Kenosha, Wisconsin. Kathy and I join his family, friends, and neighbors in hoping earnestly that he will not succumb to his injuries.

Laquisha Booker, who is Blake’s partner, told NBC’s Milwaukee affiliate, WTMJ-TV, that her and Blake’s three children were in the backseat of the SUV when police shot him.

The records contain no further details and do not list an attorney for Blake.