The bizarre crash occurred at Love Field in Dallas 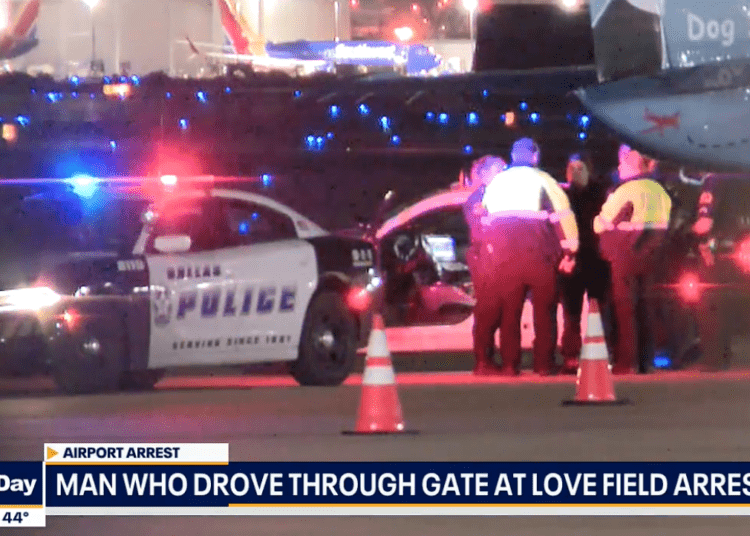 DALLAS — Impaired drivers usually crash into other vehicles and people on the roadway. However, they’ve also been known to dramatically veer off course and careen into homes, buildings, ponds and even swimming pools.

Yet on Saturday, a 21-year-old man who is accused of DUI barreled through an airport gate and into a private hangar space before striking the front bumper of a fuel truck and the wings of two private jets at Love Field in Dallas, police said.

Jaime Alexander Salazar was taken into custody and faces a DUI charge as well as additional charges that include damaging or destroying critical infrastructure, according to The Dallas Morning News.

The Dallas Police Department said Salazar was driving a red 2011 GMC Sierra pickup truck at about 3 a.m. when he recklessly crashed through an airport gate and into a private aircraft hangar.

The driver’s path continued until he struck two private jets and and a fuel truck before police stopped him, CBS DFW reported.

Police have arrested a man accused of driving a vehicle through a gate at Dallas Love Field and into a private hangar space early Saturday morning. https://t.co/TybsBXrOjT

Salazar was transported to an area hospital “due to his level of intoxication,” KDFW-TV reported.

Once he was medically cleared, he was booked at the Dallas County Jail, the Morning News reported. His bail had not been set Saturday night.

The crash did not impact flight operations at the airport and the gate was subsequently secured, WFAA-TV reported.

Director of aviation Mark Duebner said the circumstances are “relatively rare,” according to KIRO news.

“We will be reviewing this incident, speaking with all of our tenants, making sure that their perimeter security is as good as it can be,” Duebner said.

Although damage to the aircraft and fuel truck appeared minor, it is not, according to aviation lawyer Ladd Sanger. He told WFAA that even minor damage on an airplane’s wings can total an aircraft. Sanger said the damage from the incident could lead to a multi-million dollar loss.

However, what’s most concerning to him is that the suspect had direct access to a major runway.

“If there’s something that’s concerning to me, it’s that this security vulnerability allowed someone seconds from the active runway,” Sanger said.