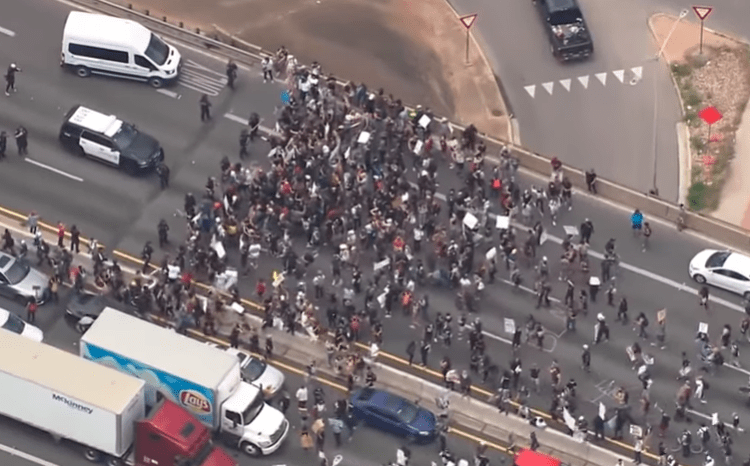 AUSTIN, Texas – At the behest of Travis County District Attorney Jose Garza, a Texas grand jury indicted 19 Austin police officers on charges of aggravated assault with a deadly weapon for their actions during 2020 riots, according to people familiar with the matter.

Multiple people spoke to The Associated Press Thursday on condition of anonymity because they were not authorized to discuss the case publicly, Fox News reported.

Austin Police Association President Ken Casaday confirmed 19 officers are facing charges but did not have details, according to the news outlet.

The officers are facing charges for deploying less lethal munitions at rioters who were blocking I-35, the main interstate through Austin, and refusing to disperse after multiple instructions by police to do so. At issue is the condition of the beanbag rounds, which were reportedly out of date and caused severe injuries to rioters.

The legal action ranks among the most indictments on a single police department in the U.S. over tactics used by officers during the widespread protests and riots.

The Austin Police Association—which has had a contentious relationship with Garza—as well as an attorney for some of the officers targeted by the grand jury say that the Austin Police Department provided defective less-lethal munitions to officers who responded to the unrest, Law Officer reported.

“The department issued these officers old and deteriorated beanbag rounds,” attorney Doug O’Connell said. “So rather than coming out as a soft beanbag they came out as a hardened projectile…so you had rioters who were seriously injured by these beanbags and it shouldn’t have happened but it’s not the officers fault it’s management’s fault.”

Word of the indictments began to spread hours after Austin city officials approved paying $10 million to two people injured by police during the civil unrest, including a college student who suffered brain damage after being struck with beanbag munitions, according to Fox.

Garza spoke to journalists Thursday afternoon about the grand jury investigation. However, he provided no specifics, including how many officers are facing charges, and for what crimes.

On Thursday, the Combined Law Enforcement Associations of Texas (CLEAT) and Austin Police Association called on Garza to cease the grandstanding with any announcements regarding cases involving the prosecution Austin Police Department officers until after the Democratic primary and runoffs, Law Officer reported.

Less than a day later, information about 19 police officer indictments has been leaked to The Associated Press.

Texas law requires that an indictment remain confidential until an officer has been arrested. The criminal charge of aggravated assault with a deadly weapon, when committed by a public servant, could carry a sentence of up to life in prison.

Casaday said the move is “devastating” for police in the capital city of Texas. Nevertheless, he’s confident that no officer will be convicted.

The police association president criticized Garza, saying the investigation is politically motivated and the progressive prosecutor seeks to “ruin lives.”

“DA Garza ran on a platform to indict police officers and has not missed the opportunity to ruin lives and careers simply to fulfill a campaign promise,” Casaday said.

During the riots, Chacon said the command staff prepared officers to face hundreds of protesters. However, thousands showed up and the civil unrest became “righteous and violent.”

“I am not aware of any conduct, that given the circumstances that the officers were working under, would rise to the level of a criminal violation by these officers,” Chacon said.

Yet beanbag munitions deployed by police personnel did not always perform “in the manner anticipated,” Chacon emphasized. The Austin Police Department now prohibits the use of “less lethal munitions in crowd-control situations.”

Thursday’s civil settlements are among the largest paid to people who were injured by police across the U.S. during massive protests and riots.

Justin Howell, who was 20 years old when police launched a beanbag round at him, is set to receive $8 million. Family members told the AP following the incident that Howell reportedly suffered a cracked skull and brain damage.

Anthony Evans was 26 during the riots. The city will pay him $2 million after he was plugged with a beanbag munition is a separate incident. His injury reportedly result in extensive medical treatment to his jaw.

Following the riots, Manley said Howell was not the intended target after an altercation in a crowd, which he said involved people who threw objects at a line of officers. Authorities have said that led to the officers firing at the mass of protestors from above.

David Frost captured on video the moments after Howell was struck by a beanbag munition. He told the AP that he saw protesters throwing fist-sized rocks and water bottles at the line of police on an overpass. Then he saw Howell fall. He was bleeding heavily and went into a seizure, Frost said at the time, according to Fox.

The settlements represent two payments among a dozen lawsuits filed in Austin that have claimed injuries during the riots.

The Austin American-Statesman reported earlier this month that a $150,000 settlement was approved for a woman named Ariana Chavez. She was reportedly struck in the head with a less lethal munition resulting in a concussion.

At least 19 people were hospitalized in Austin following the protests and riots.

According to Fox News, 11 officers were disciplined for their actions during the civil unrest, with seven additional officers placed on administrative duty.

Garza’s office was asked how many law violators were prosecuted for criminal actions during the riots. A spokesman could not provide a list of individuals who were charged with crimes during the riots, Law Officer reported.

(Note: The DA said during Thursday’s press conference that charges were filed against 33 individuals following the riots, with 11 cases still pending.)

“No, I can’t and as far as I know, we don’t track any of our cases that way,” Travis County DA Public Information Officer Ismael Martinez said. “You would need to create an open records request to get that information.”