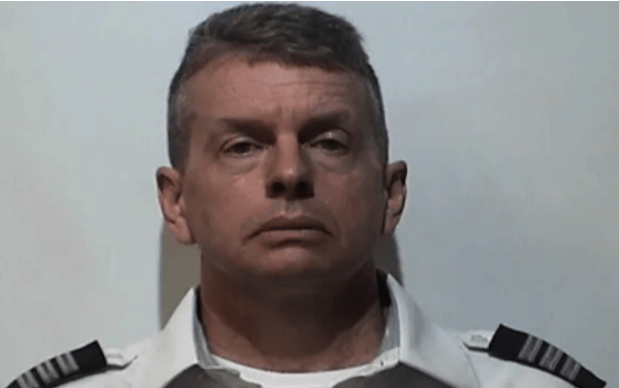 PEMBROKE, Ky. — A one-time U.S. Army major and American Airlines pilot who was pulled off a commercial flight in 2019 and charged with committing a 2015 triple homicide and arson was convicted on all charges Tuesday, according to reports.

Former American Airlines pilot Christian “Kit” Martin was found guilty on all 10 charges after the jury deliberated for eight hours. Moreover, the jury recommended that he serve life in prison without the possibility of parole on the three murder charges, WSMV reported.

The Hardin County jury found Martin guilty of the following crimes and recommended the listed sentences:

Martin told WSMV in 2016 that he was not worried about being charged in the murders, which occurred November 18, 2015. After the verdict was read on Tuesday, he was stoic and showed no emotion, although he reportedly made a gesture of astonishment as he was being led back to jail.

During the trial, prosecutors argued that Martin initially intended to kill his neighbor, Calvin Phillips, to prevent him from testifying in Martin’s court martial hearing at Fort Campbell, which was scheduled to take place just two weeks after Phillips was murdered. The prosecution asserted that Martin fatally shot Phillips, then killed Pamela Phillips and Edward Dansereau because they stumbled across the crime scene at the wrong time, WSMV reported earlier.

Calvin Phillips was found dead in his Pembroke, Kentucky, home on Nov. 19, 2015, and the remains of Dansereau and Pamela Phillips were discovered in a burned vehicle in a field, USA Today reported. Philips home was directly across the street from Martin’s residence.

The sentencing hearing is scheduled for Sept. 2.

In an earlier and separate proceeding — and without Phillips as a witness — a military tribunal convicted Martin, a 30-year Army veteran, on one count of assault on a child and one count of mishandling classified information. Martin was sentenced in that proceeding to 90 days in jail and discharged from the service, Law&Crime reported. He had been accused of battering his ex-wife’s children for taking sensitive military equipment.