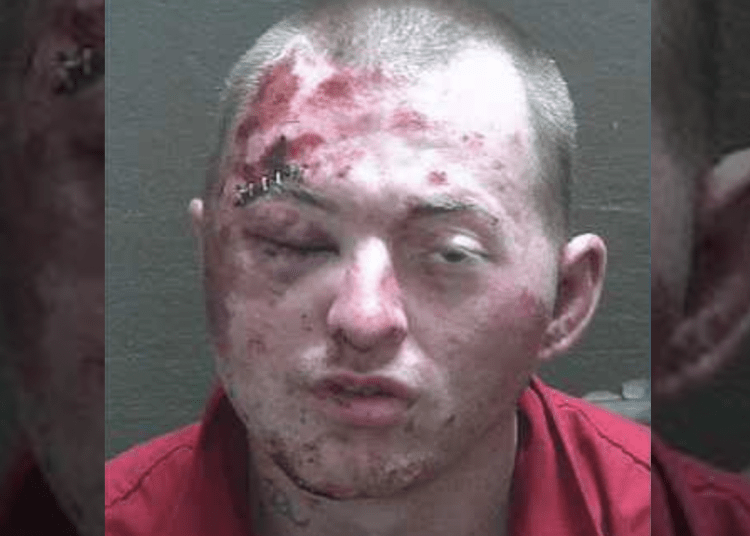 PENSACOLA, Fla. – A Florida sheriff’s office says a man tried to fight deputies and their K9 as he resisted arrest. Nevertheless, the combatant was ultimately taken into custody.

A citizen called 911, telling dispatchers that a man was walking in and out of traffic and tried to grab his steering wheel, WEAR reported.

The caller then said the suspect was trying to break into his home with his daughter inside.

As a result, Escambia County deputies responded to the home and spotted Eric Tyler Mathis, 25, hiding behind a tarp on the property.

When deputies tried to arrest the suspect, they were met with “violent resistance,” the sheriff’s office said.

“He fought two deputies and resisted their efforts to use a Taser,” according to investigators.

When the taser was ineffective, deputies deployed K9 Zeek on Mathis, who reportedly grabbed the dog around the neck, Fox10 reported.

After a vicious struggle, deputies finally managed to get Mathis cuffed.

“While the men and women of the Escambia County Sheriff’s Office make every effort to serve the public without having to use force, there are times when suspects violently resist our efforts,” the sheriff’s office said.

Based upon the booking photo, this was one of those occasions.

Neither the deputies nor K9 Zeek were seriously injured in the incident. However, Mathis’ mugshot showed multiple bruises and staples on his eyebrow.

Consequently, Mathis faces multiple charges, including robbery, burglary, resisting arrest with violence, battery on a law enforcement officer, and battery on a police K9. He is being held on $136,000 bond.

“I would rather our deputies not have to use any force,” Sheriff Chip W. Simmons said in a statement. “I also wish criminals did not put our citizens and deputies in harm’s way.”