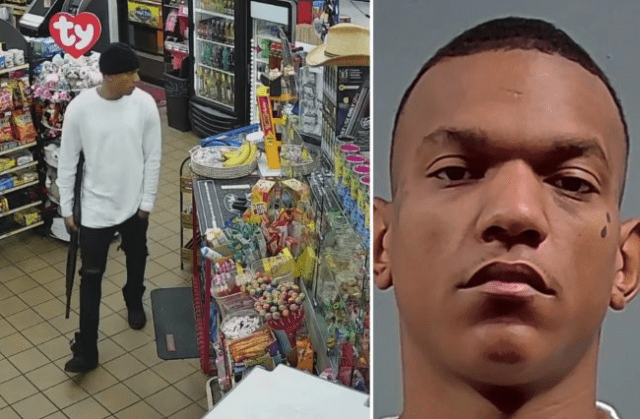 Rakim Stephen Tate aborted a robbery once he encountered a clerk in possession of a weapon. (Escambia County Sheriff's Office)

PENSACOLA, Fla. – A man armed with a shotgun casually strolled into a Florida convenience store during an attempted robbery. The suspect said he was from Chicago — as if that was suppose to instill fear in the employee — but eventually made an exit once the store clerk displayed his own weapon, according to authorities.

Rakim Stephen Tate, 32, entered the Pensacola convenience store in the 4000 block of North Pace Blvd. earlier this month, while carrying a shotgun at his side, the Daily Mail reported.

However, the robbery was aborted once the suspect encountered a clerk who was armed. Tate is now charged with attempted robbery and openly carrying a prohibited firearm, according to the Escambia County Sheriff’s Office.

A press statement from ECSO, posted under the headline “Robbery Attempt,” said the showdown occurred Sept. 9.

“Unbeknownst to the ‘would-be’ robber, a store employee had watched him arm himself before entering the store. This employee headed to the backroom to arm himself (with his own personal gun),” the sheriff’s office wrote.

Although the employee was off-camera for most of the encounter, this is how the Sheriff’s Office described it:

“Seconds later, when he sees the employee return, he freezes…oh boy. The employee returned to the counter holding his own gun toward the befuddled attempted robber. He then fumbles for words, resorting to meaningless babble about being from Chicago. Words seem to fail you when your felony attempt is thwarted by lawful and righteous force. Thankfully, he decides that it is not the time for a robbery, and he slowly exits the store.”

Investigators tracked him down, and Tate was arrested six days later in nearby Santa Rosa County. Authorities recovered the shotgun and booked the “Chicago man” in jail for attempted robbery with a firearm and openly carrying a prohibited weapon. His bond was set at $100,000.

Booking records show that Tate was also arrested 15 months earlier (in Florida) for allegedly firing a weapon, carrying a concealed weapon and possession of marijuana. He bonded out of that one after two days with a $4,500 bond, the Western Journal reported.