Fayetteville chief says suspect ‘executed one of my police officers’ 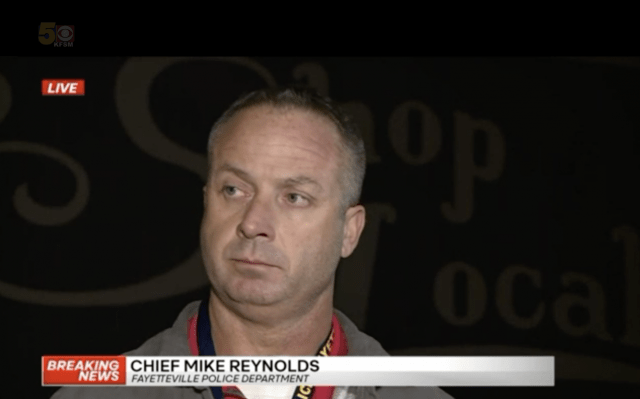 FAYETTEVILLE, Ark. – A Fayetteville police officer has been shot and killed near the Fayetteville Police Department, according to Police Chief Mike Reynolds. The suspect was killed in a gun battle with responding officers.

Reynolds says at about 9:40 p.m. Saturday night, a suspect “executed one of my police officers.”

The reports came in that the shots were fired in the back parking lot of the police station, according to Reynolds.

Reynolds says several officers were inside the department at the time and came out to find an officer down next to a police cruiser in an alley behind the station. Officers engaged with the suspect in the alley, according to Reynolds, and shots were fired. The chief said responding officers who chased the gunman into a nearby alley, and returned fire when fired upon, apparently shot the suspect. However, it is uncertain at the present time who fired the fatal round.

“The officer was waiting on his partner to go to Dickson Street and work their beat,” Reynolds said. Moreover, the chief said the officer was alone in the parking lot near his police cruiser, reported Arkansasonline.com. The motive for the apparent execution is unclear at this time.

Reynolds said Fire Department emergency medical personnel were sent to the parking lot and worked on the wounded officer and the gunman. However, both died at the scene.

The names of the officer and the gunman weren’t released late Saturday.

The Washington County Sheriff’s Office and the FBI were called upon to process multiple crime scenes.

Fayetteville’s Police Department is near the city’s square. According to reports, people attending the Lights of the Ozarks display on the square heard the shots. No one else was injured, said police spokesman Sgt. Anthony Murphy.

“We think about stuff like this and we know it could happen here, but you hope it never does,” he said. “It happened here. Now we’re here to pick up the pieces.”

It was a somber day for law enforcement officers as Houston police Sgt. Christopher Brewster was also murdered Saturday during a call of domestic violence.

Deadly shootings overnight have claimed the lives of two police officers. Sgt. Christopher Brewster was killed while responding to a domestic violence call in Houston, police say. In Arkansas, police in Fayetteville say one of their officers was “executed” in a parking lot. pic.twitter.com/9svMHKGoz7