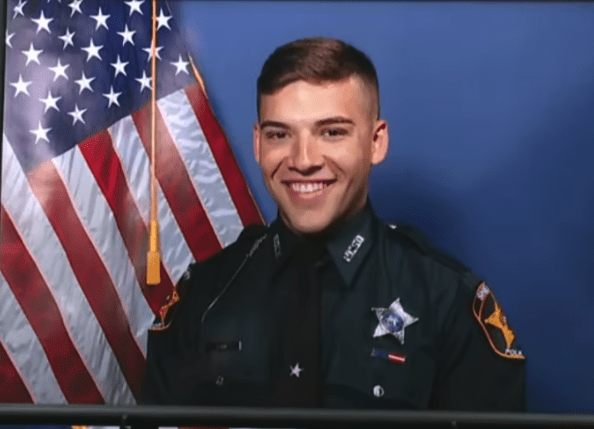 POLK COUNTY, Fla. – The deputy killed by gunfire was as identified 21-year-old Blane Lane. Sheriff Grady Judd said he was killed in a shootout after being accidentally struck by a round from another deputy, WESH reported.

The suspect was identified as Cheryl Williams. Judd said she was armed with a replica firearm, which was actually a BB gun. She was struck twice by gunfire.

Williams is currently in custody and under guard while hospitalized. She will be charged with felony second-degree murder and other charges once she is medically cleared for booking.

POLK COUNTY, Fla. – A young deputy with the Polk County Sheriff’s Office was shot and killed early Tuesday morning in Polk City during the service of an arrest warrant, according to authorities.

Sheriff Grady Judd, in a video on the Sheriff’s Department Facebook page, said the shooting occurred about 3 a.m. on Foxtown South in unincorporated Polk City, reported The Ledger.

According to the sheriff, four deputies were serving an arrest warrant. The charge on the warrant was failure to appear for a narcotic offense. He said deputies entered a trailer, and shots were fired.

“And ultimately, one of our very young deputies — 21 years of age, he’s been with us a short time — died at Lakeland Regional Medical Center, despite the valiant efforts of Polk Fire Rescue and our wonderful trauma center,” Judd said.

A procession of patrol units and a sheriff’s helicopter escorted the deputy’s body from LRHMC to the medical examiner’s office off of Winter Lake Road in Winter Haven about 8:30 a.m.

The sheriff did not release the deputy’s name as notifications were still being made. He said more details, including the identity of the suspect, would be released during a press conference later on Tuesday.