When retired Major League Pitcher and Cy Young Award Winner Roy Halladay was killed in a fatal plane crash on Tuesday, the local Sheriff’s office was impacted greatly by the death. 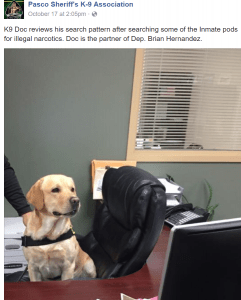 One of the most notable instances included Halladay donating the funds for a department canine.

The officers repaid the future Hall of Famer in a small, but lasting, way — they named the dog Doc. K9 Doc, to be exact. The Pasco County Sheriff’s office has a Facebook page dedicated to their K9 unit and it’s brimming with pictures of Doc The Dog.

“Roy meant a lot to the Sheriff’s office,” Nocco said at his press conference. “He was there whenever we needed him. He was one of the most humble human beings you’ll ever meet. K-9 Doc is out there working and saving lives.”

Share and speak up for justice, law & order...
Tags: baseballmlbplane