The sound of gunfire echoed throughout the park 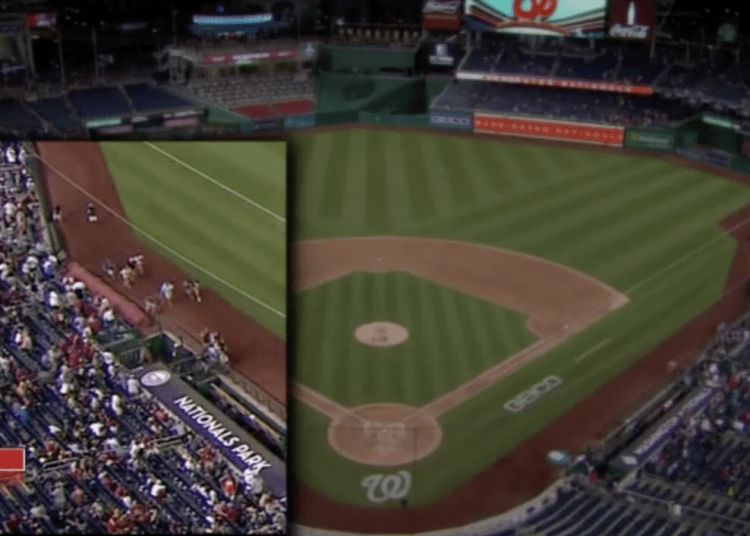 WASHINGTON — A Major League Baseball game between the San Diego Padres and the Washington Nationals was interrupted by gunfire, which echoed throughout the park Saturday night. The game was suspended in the sixth inning as fans scrambled for safety and the stadium was eventually cleared out, according to several reports.

One of the shooting victim’s was a woman attending the game. She was struck while she was outside the stadium, the assistant chief said.

Two people who were in one of the vehicles later walked into a local hospital with gunshot wounds and were being questioned by investigators, Benedict said. The extent of their injuries wasn’t immediately clear. Investigators were still trying to locate the second vehicle involved in the shooting, ESPN reported.

The gunfire that could be heard in the stadium created panic among workers and those in attendance. People sought cover not knowing what was going on. The panic created a level of hysteria due to the unknown trouble.

“It was just a chaotic scene,” umpire crew chief Mark Carlson told The Associated Press. “We heard what sounded like rapid gunfire. We didn’t know where it was coming from.”

“Something crazy going on at Nationals Park,” Boston Globe sportswriter Ben Volin tweeted. “Players just sprinted off the field and fans running from the stands.”

The Padres had just taken the field for the bottom of the sixth when several loud pops were heard from the left field side of the ballpark. This led players from both teams to clear the field, according to ESPN.

As some fans began to briskly leave the stadium, others crowded into the Padres’ dugout on the third base side for cover, while sirens could be heard from outside the park.

Ted Borenstein, 26, was in attendance. He said he quickly realized it was far more serious when he saw people in the stands start filing out and watched Padres star shortstop Fernando Tatis Jr. “bolt from the field.”

In the stadium’s Diamond Club, where he and his friends were, people were hiding under tables and chairs, thinking there was a shooter inside the stadium.

“People were down on the ground, kind of petrified, trying to calm down the younger kids,” he said.

Tatis later tweeted his concern for fans and his gratitude to frontline workers.

Hope everyone is safe! Just keep the prayers up🙏🏾 thank you everyone that help in the front line ! God bless 🙏🏾

The scene outside the stadium was quickly filled emergency vehicles.

About 10 minutes into the confusion, the Nationals tweeted: “A shooting has been reported outside of the Third Base Gate at Nationals Park. Fans are encouraged to exit the ballpark via the CF and RF gates at this time.”

The Padres led 8-4 when the game was suspended. It will be resumed Sunday afternoon. The Nationals said fans can expect an increased security presence when play resumes.