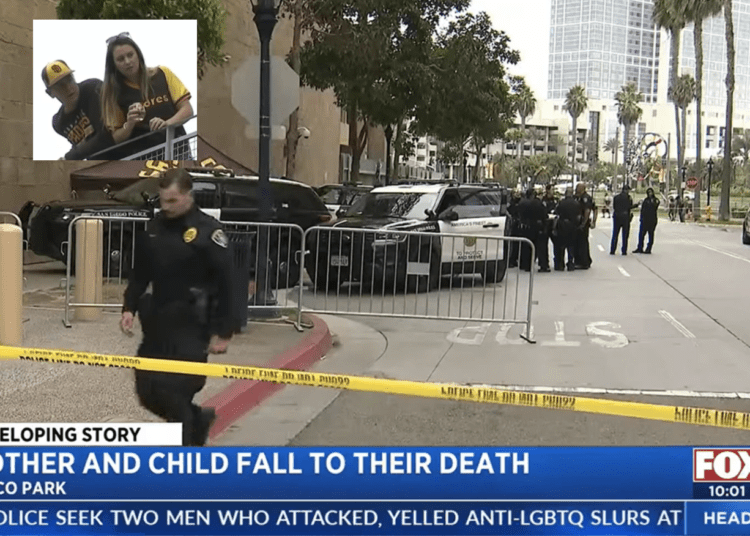 SAN DIEGO — A mother and her 2-year-old son fell six stories and died in a horrific scene at Petco Park in Southern California on Saturday. Police said the dramatic incident “appeared to be suspicious,’’ according to reports.

Thousands of baseball fans were arriving Saturday at the ballpark for the San Diego Padres game scheduled for 4:15 p.m. when the 40-year-old woman — who was not identified — and young child fell off the stadium’s dining concourse around 3:50 p.m., according to law enforcement authorities.

A man told the San Diego Union-Tribune that his wife saw the fall and told him it looked like the little boy plummeted first and that the mother then went over trying to grab onto him.

Although first responders provided emergency medical aid, the mother and son were pronounced dead at the scene, according to authorities.

Police said the fatal incident “appeared to be suspicious,” although San Diego Police Lt. Andra Brown added, “We do not know the circumstances surrounding it. … We do not know if it was accidental or intentional.”

Police were reportedly speaking to the child’s father at the ballpark in addition to several witnesses, New York Post reported.

“It’s a tragic event,” Brown said. “We feel horrible for the families and our hearts obviously go out to the family members, but also the people here that potentially could be traumatized.”

Although some fans were horrified after witnessing the incident, others were somewhat unaware. A Padre fan provided his perspective of the tragedy.

“They were just keeping us away from that area, we thought it was standard protocol, but everyone along this side was keeping us out of that area,” Brian Howell said, the Post reported. “All we heard was that there might have been an unfortunate incident.”